Why Have Mortality Rates Been Rising for US Working-Age Adults?

Why Have Mortality Rates Been Rising for US Working-Age Adults? 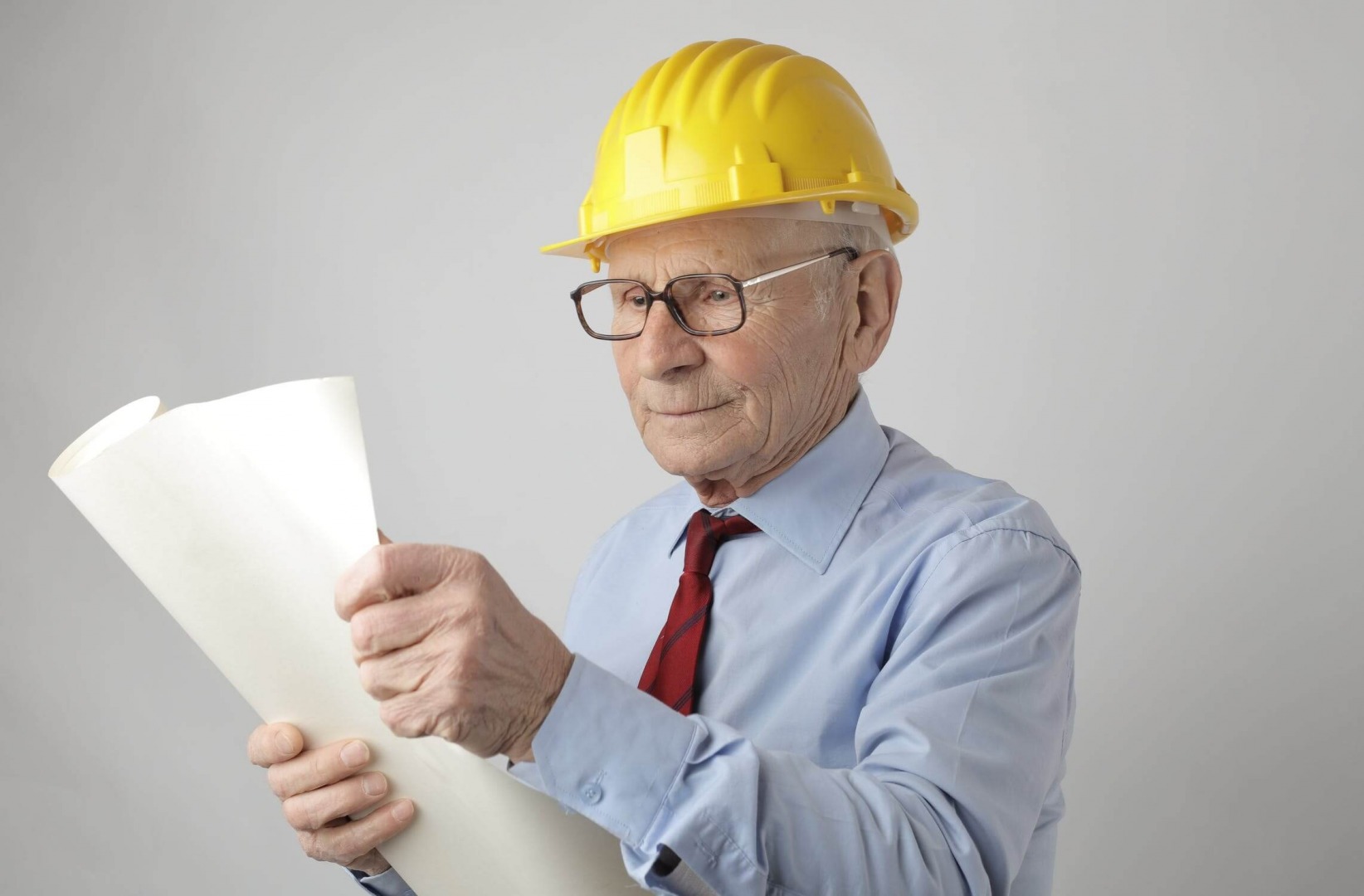 The mortality rate for "working age" US adults in the 25-64 age group has been rising.

This isn't a pandemic-related issue, but instead something with roots in the data going back several decades. The National Academies of Sciences, Engineering, and Medicine digs into the underlying patterns and potential explanations in "High and Rising Mortality Rates Among Working-Age Adults" (March 2021, a prepublication copy of uncorrected proofs can be downloaded for free). Their evidence and discussion is mainly focused on the period up through 2017.

The NAS report compares the US to 16 "peer countries," which are other countries with a high level of per capita income and well-developed health care systems. (The 16 countries are Australia, Austria, Canada, Denmark, Finland, France, Germany, Italy, Japan, Norway, Portugal, Spain, Sweden, Switzerland, the Netherlands, and the United Kingdom.) The two panels below compare life expectancy going back to 1950 for females and males in the US (red line) and the average of the peer countries (blue line). The almost-invisible gray lines show each of the 16 peer countries separately. 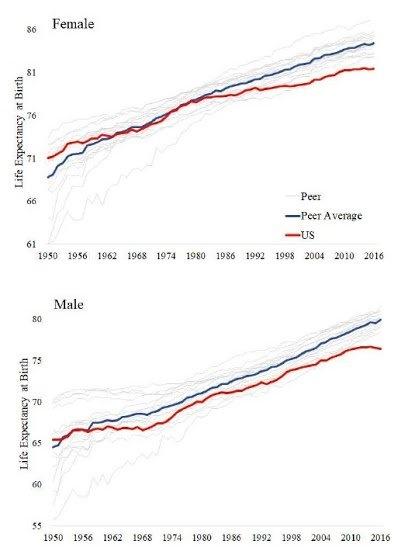 The report also does a breakdown of the same data by racial/ethnic status. In this figure, the red line shows only white US females and males. The dotted line shows non-white Hispanics, and is available only for recent years, but it pretty much overlaps the peer group. The  dashed line shows black Americans. There is still a life expectancy gap between white and black Americans, but the gap has generally been declining over time. The levelling out of US life expectancies for the 25-64 age group in the last few decades has been largely a phenomenon affecting white Americans. 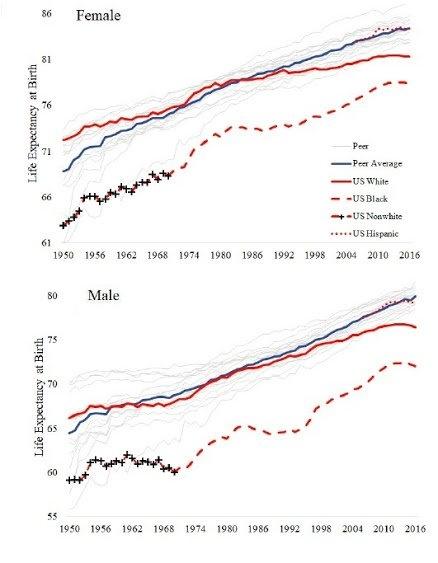 Notice that this comparison is not about infant or child mortality rates, nor is it about life expectancy for the elderly. Indeed, life expectancies for US infants and for children under the age of 10, and for adults who have already reached their 80s  are higher than for the peer group of countries. It's the in-between age group where the difference arises.

As one digs into these patterns more closely, here are some of the details that emerge:

The committee identified three categories of causes of death that were the predominant drivers of trends in working-age mortality over the period: (1) drug poisoning and alcohol-induced causes, a category that also includes mortality due to mental and behavioral disorders, most of which are drug- or alcohol-related; (2) suicide; and (3) cardiometabolic diseases. The first two of these categories comprise causes of death for which mortality increased, while the third encompasses some conditions (e.g., hypertensive disease) for which mortality increased and others (e.g., ischemic heart disease) for which the pace of declining mortality slowed. ...

[I]ncreasing mortality among U.S. working-age adults is not new. The committee’s analyses confirmed that a long-term trend of stagnation and reversal of declining mortality rates that initially was limited to younger White women and men (aged 25–44) living outside of large central metropolitan areas (seen in women in the 1990s and men in the 2000s), subsequently spread to encompass most racial/ethnic groups and most geographic areas of the country. As a result, by the most recent period of the committee’s analysis (2012–2017), mortality rates were either flat or increasing among most working-age populations. Although this increase began among Whites, Blacks consistently experienced much higher mortality. ...

Over the 1990–2017 period, disparities in mortality between large central metropolitan and less-populated areas widened (to the detriment of the latter), and geographic disparities became more pronounced. Mortality rates increased across several regions and states, particularly among younger working-age adults, and most glaringly in central Appalachia, New England, the central United States, and parts of the Southwest and Mountain West. Mortality increases among working-age (particularly younger) women were more widespread across the country, while increases among men were more geographically concentrated.

Many of these factors overlap in various ways, and the subject as a whole is not well-understood. A substantial portion of the NAS report is a call for additional research. But if I had to extrapolate from the available data, one pattern that seems common is about parts of the US feeling separated and isolated, either by urban/nonurban status or by socioeconomic status. The specific causes of death contributing to the pattern seem to share the trait that they are potentially worsened by life and economic stress.

Although the report is about long-term trends, not the pandemic, it does offer the insight that COVID-19 has added to the disparity of mortality rates for working-age adults. Yes,  the elderly accounted for by far the largest share of COVID-19 deaths. But if one looks in percentage terms, the report notes:

Thus, COVID-19 has reinforced and exacerbated existing mortality disparities within the United States, as well as between the United States and its peer countries. The CDC reported that adults aged 25–44 experienced the largest percentage increases in excess deaths during the pandemic (as of October 2020).