How Computer Vision Can Aid Law Enforcement in Smart Cities

How Computer Vision Can Aid Law Enforcement in Smart Cities 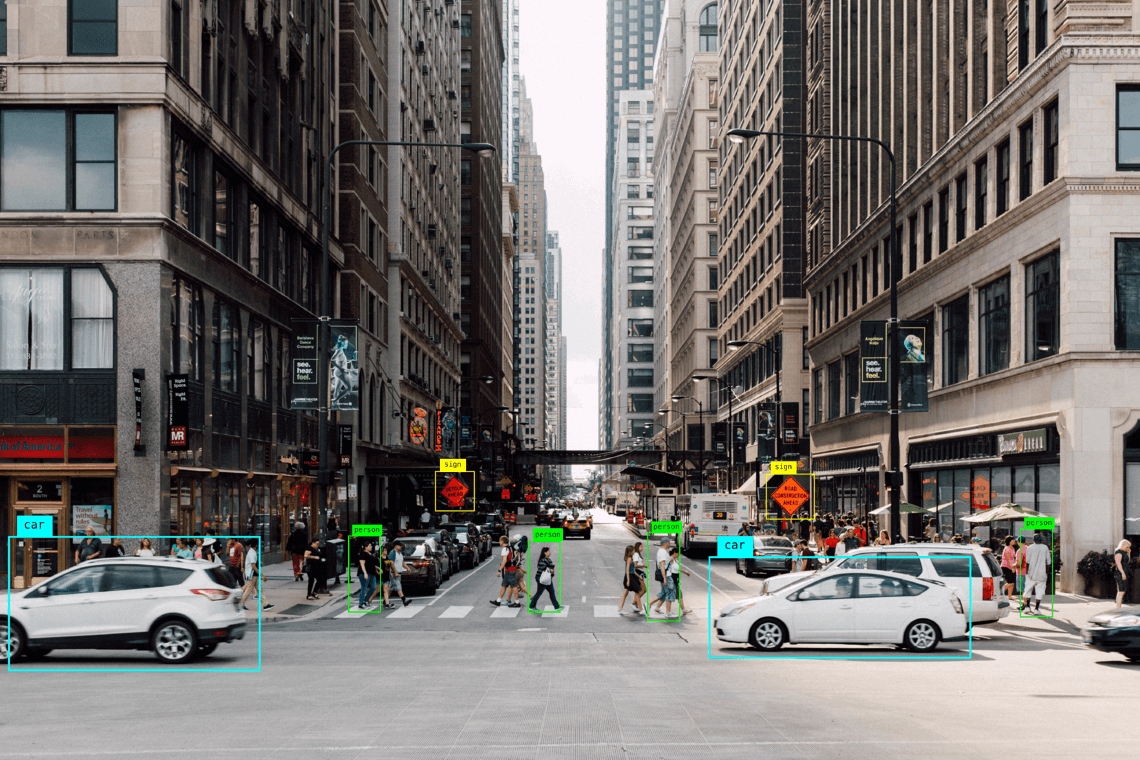 Smart cities try to manage law enforcement and crime regulation through cutting-edge technologies such as AI and IoT.

The application of computer vision in smart cities could be hugely helpful for law enforcement officers everywhere.

If there were human beings, computer vision would represent their visual and perceptive features. Computer vision, also known as machine vision, aids AI with identifying and classifying visual data. On top of this, the technology also assists organizations and public bodies with long-term decision-making using AI’s pattern recognition and high-end analytical capabilities. With widely-used applications such as facial recognition and inventory monitoring, computer vision today is nearly indispensable for industries as varied as retail, healthcare and manufacturing. Several smart cities have emerged around the world in recent years, and are expected to show exponential growth in the near future. These cities deploy IoT, AI and data sensors to make traffic regulation, transportation, water and waste regulation, IT, educational institutes, libraries, healthcare services and other operations in several other fields much more systematic and coordinated. Most importantly, smart cities have the digital tools in place to assist law enforcement bodies. Law enforcement officers in many countries could use a helping hand to keep crime rates under check-in in their jurisdictions. AI and computer vision can be trusted with providing reliable assistance to crime fighters everywhere due to their advanced data analysis and predictive abilities. The killer mix of computer vision in smart cities opens up endless opportunities for crime detection and regulation. Here are some ways in which computer vision can make the work of law enforcement officers all over the world much easier:

Computer vision aids machine learning by capturing and processing visual data for further analysis. Technology could play a similar role in the field of law enforcement too. Smart cities deploy multiple cameras and sensors to get a continuous stream of information for their law enforcement officers. As a result, computer vision enables such professionals to react promptly to criminal activity. However, the coolest application of computer vision in law enforcement may be the prediction of crimes before they take place. Some movies, like Steven Spielberg’s 2002 hit Minority Report, have explored the concept of pre-emptive detection of likely crimes to prevent individuals from committing them. However, in the real world, computer vision uses historical data and AI’s pattern recognition, among other tools, to forecast crimes.

Computer vision-based crime prediction systems use statistical observations of crimes in an area to detect, prevent and resolve crimes at a quicker rate. Computer vision can play its part in predictive analysis by providing 3D object and pedestrian detection, advanced facial recognition, location recognition, and difference identification. Basically, machine learning uses the idea that crimes can be predicted based on certain underlying events that had culminated in crimes in the past.

Naturally, crime forecasting is still not highly advanced for extensive usage. The US, the UK, the Netherlands, Germany, and Switzerland are among the countries that tentatively apply this concept in their law enforcement operations today. It is unlikely that computer vision-enabled crime prediction will be used in law enforcement in the near future. However, it can still be used in self-driving cars. Traffic policemen can benefit from collision prediction in order to stop road accidents.

Drones offer practical solutions to law enforcement officers for crowd management and unmanned traffic regulation. Computer vision technology can be included in drones to boost their image capture and analysis abilities. The use of computer vision in smart cities and drones is mainly for real-time image and video analytics for law enforcement departments.

There are certain issues that can block the application of drones for public surveillance. Firstly, the drones will have to be used in such a way that the privacy of civilians will not be compromised in any way. To meet this requirement, countries may pass laws to ensure that drones are only used for search and rescue operations, accident reporting, disaster management, and emergency relief.

Several countries deploy drones for law enforcement purposes. Some of the prominent ones are the Netherlands, Spain, and Germany. In these countries, which fall within the European Union, drones are used for surveillance whilst being strictly governed by the EU's stringent GDPR data protection and privacy laws. The restriction on surveillance ensures transparency in the usage of this application.

Drones can be a useful law enforcement ally for field officers because they can relay back information to police headquarters if the machine vision detects that an officer needs a break during or after strenuous anti-criminal activity. A Chicago-based drone system is currently being used by the North Carolina Police department in the US. 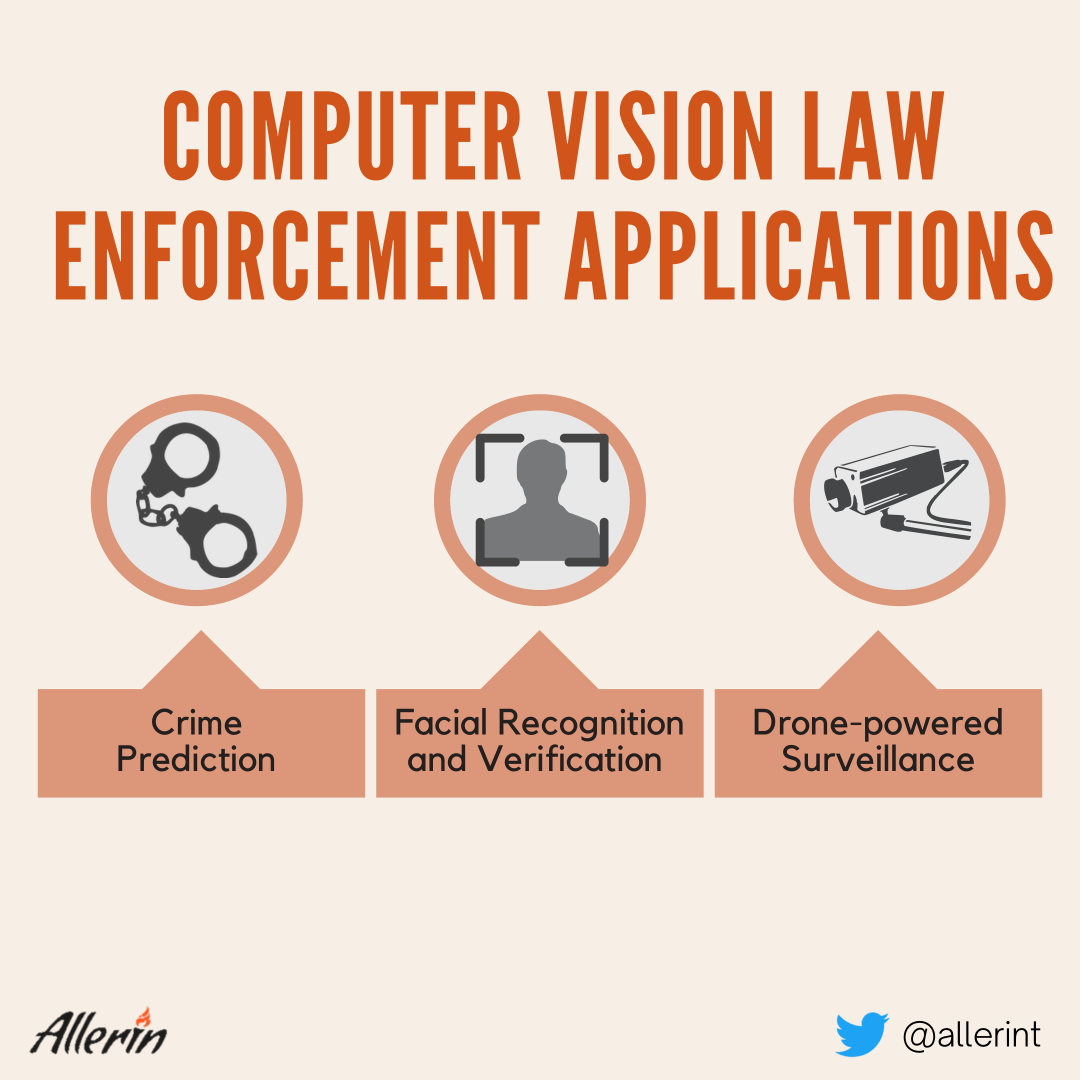 Facial recognition in law enforcement can be put to use for the relentless surveillance of crime suspects out in the open, apprehension of legal offenders, and overall crime detection and prevention. The technology is useful for lie-detector tests as the computer vision components in such systems can scan the emotional reactions and facial movements of interrogation subjects to imply whether they can be classified as perpetrators (or eyewitnesses) in criminal cases or not. As we know, ‘experienced’ machine learning systems can fall back on billions upon billions of documents of past data that allows them to gauge a subject’s reactions and inform the interrogators whether their target is guilty (or concealing information) from them or not. Such assistance can be invaluable for law enforcement officers because it allows them to dig deeper for clues against such individuals.

Apart from being used for suspects’ interrogation purposes, facial recognition technology can be used for finding stealthy individuals related to criminal activity. Finding someone who is trying his or her best to not get caught after committing a crime can be challenging for law enforcement officers. However, advanced facial recognition can unerringly pick out such individuals even if they are trying to hide amidst a sea of people in heavily crowded areas. For machine training, data experts in law enforcement agencies provide facial recognition systems with the picture of such individuals. Based on pictorial and video-based data, the computer vision element in a facial recognition system can create a 3D model of the individual’s face and overall appearance. What’s more? The technology does its job regardless of background lighting, identity-concealing disguises, and facial hair growth to avoid identification. Since such an application would require high levels of connectivity and seamless data flow, smart cities are the ideal ecosystem where it can be implemented. Smart cities have sensors and cameras that can track down suspects and malicious individuals even in suboptimal lighting and visibility.

Apart from facial recognition, computer vision also empowers such systems to closely verify and compare faces so that the job of law enforcement officers is simplified. Facial validation may actually be more useful as it lets officers know whether a captured individual is innocent or not (depending on their criminal record) and whether the individual the police are after and the one taken into custody are the same person.

More intriguingly, another one of its prime applications is to let law enforcement officers and general facial recognition systems know whether the person on the other side of a screen is a real human being or just a bot. As you may have seen, several websites always ask new account creators to let the system know that they are not robots. Fake image detection can be hugely problematic for law enforcement agencies as it would just lead them to chase faceless shadows over the internet. As a result, computer vision’s facial recognition and verification elements are highly useful for police officers and other law enforcement officers worldwide.

The internet has revolutionized everything since its emergence on this side of the new millennium. While the internet has made our lives more convenient, it has also jacked up the possibilities of crimes over the online medium. Heinous crimes, such as murder, drug smuggling, and human trafficking, can be carried out over the internet. As an answer, law enforcement bodies adapt so that crime rates can be controlled even in this advanced digital age. Through these applications, law enforcement applications of computer vision in smart cities can be instrumental in keeping people, including security personnel themselves, safe and secure.