Life Lessons from the Ocean

Life Lessons from the Ocean 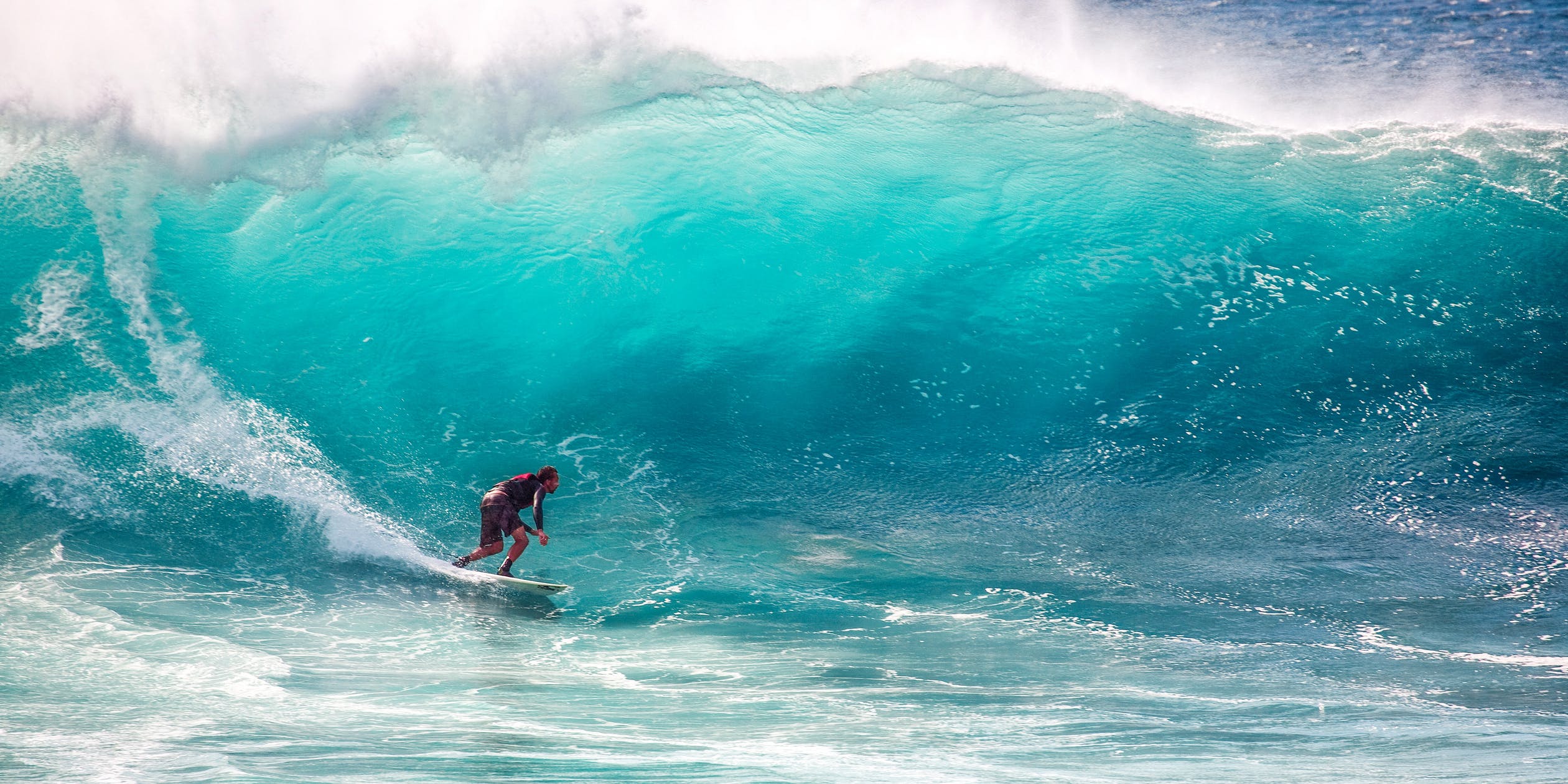 I remember the morning vividly. It was early, a nice off-shore breeze was making the waves sit up nicely. I was a long way back from the ocean and I could still see the waves curling over and peeling off to the right...these waves were big.

At least, to a rank amateur surfer like me they seemed big, too big. My 'instructor' had arrived and we headed off to the shoreline. I grabbed my rented board, it was a 9' 2" fibre glass beast. Kind of like surfing a tectonic plate, not overly hard to stand up on and not particularly manoeuvrable. We paddled out. The waves looked a lot bigger from the board.

The swell was circa. eight feet and moving with force. Paddling up and over the face was like climbing the face of a skyscraper and careering down the back side, spray off the top creating an exhilarating mist in my face. I have to say, I was concerned that these were many feet beyond my capability and a long way beyond the fringes of my comfort zone.

As we ploughed towards the break, my instructor called out to me," don't be scared of the waves" (too late). I assured him I was ok. I was scared. I make no bones about it. But I made a personal commitment that it was alright to feel fear, I just had to ensure that my courage eclipsed it. This was one of those times when that commitment was tested.

Learning to surf requires several things; fitness, knowledge, skill, persistence, patience and a boat load of courage. It's so mental. Fear stops many novice surfers from persisting because, bluntly, so much can go wrong. You can get into trouble quickly.

I got into a lot of trouble that day. I would say that was the closest to death I have experienced. The waves were starting to close out (making the waves 'unsurfable'). I was told to catch a wave as far into shore as possible, carving off to the left. I paddled like mad, got swept up by an eight footer and accelerated forward, I got up onto my feet (the tectonic plate helped enormously) and rode that baby for as long as possible. Wow, what a feeling. Hooked. Courage prevailed.

As I came back to the surface I went searching for my board. And then I heard what was coming up behind me. A full set of four to five waves, crashing towards me, white water hurling its way towards the shore.

F*ck the board, it can look after itself.

I got pounded. Pushed under water, taken to a depth where things got darker, spinning around. Then my leg got yanked and I got pulled, under water, as the board got picked up by the tumbling skyscraper. After what seemed like a minute or so (it would have been only about 10 seconds) I popped up, gasped for air, and got pounded by the next one. Same drill as before, over and over again. By the time the last wave hit I was just about out of air to breathe. Certain that I couldn't survive another hold down, I got washed up onto some rocks. What a relief.

Courage is great but not being prepared can be a lesson that gets delivered with humbling force. Not just in surfing but in life. That was a big lesson. I survived, barely but that was reckless.

I give speeches, professionally. I keynote conferences. I still get nervous. Courage takes care of most of that but the final nudge that flips nervousness into excitement is making sure that I am completely prepared and researched. Preparation, and knowledge, can make the difference. You have to know what you are paddling into.

For many, that experience would have ended their surfing endeavours. It damn near ended my life, let alone my attempts at surfing. But I still surf. Albeit on smaller waves (and a smaller board). Fear could have knocked me out of the game. One bad experience can be enough to stop us persisting. Perspective, however, can get us to try something just one more time. Standing back from that day and seeing it for what it was; inexperienced, unprepared and conditions beyond my capability. Reset and go again. Sometimes in life we need to change our perspective and just go one more time.

Unfortunately, competence doesn't always track at the same rate as confidence (something I have encountered when riding a motorbike...a story for another time). Competence can lag. However, competence can also be impeded by lack of confidence. Backing yourself can be just the ticket to release the level of skill and ability that is actually there, masked and hidden by a lack of confidence. Surfing is a lot like that. It takes significant technique to carve along a wave or catch a tube. But in order to actually stand up, it really just takes a splash of confidence.

As a result of experiencing multiple hold downs, I have taken to experimenting with underwater swimming and breath holding. I call it 'Death Avoidance Training' or DAT for short...the key to achieving duration and distance under water is to be as relaxed as possible. I can tell you, its doesn't come naturally. Learning to relax through the convulsive stage of breath holding and resisting the urge to breath is not overly enjoyable. Its particularly challenging being tumbled around, involuntarily submerged, by a heavy body of water and staying relaxed at the same time. Holding your breath and relaxing under duress is, however, the right course of action. A skill that transfers wonderfully to business and life - the ability to stay calm while the crisis unfolds around you.

I wrote this article, not to share 'five nuggets of wisdom' - let's be honest, these lessons are not new. I wrote the article to encourage you to go surfing!

...and it just might give you some of your best life lessons too.

Mike is an international keynote speaker, investor, author and advisor. He thrives in rapidly growing and innovative organisations helping them find the transform and create long term, sustainable value creation. His main goal is to drive businesses forward by building strong, long term, mutually beneficial relationships with senior leaders and assisting their career success. His specialties include management strategy and revenue optimisation. Mike holds a Bachelor of Science (BSc) in Management from the University of Portsmouth.