Why The Best Leaders Always Overprepare But Don't Overthink

Why The Best Leaders Always Overprepare But Don't Overthink 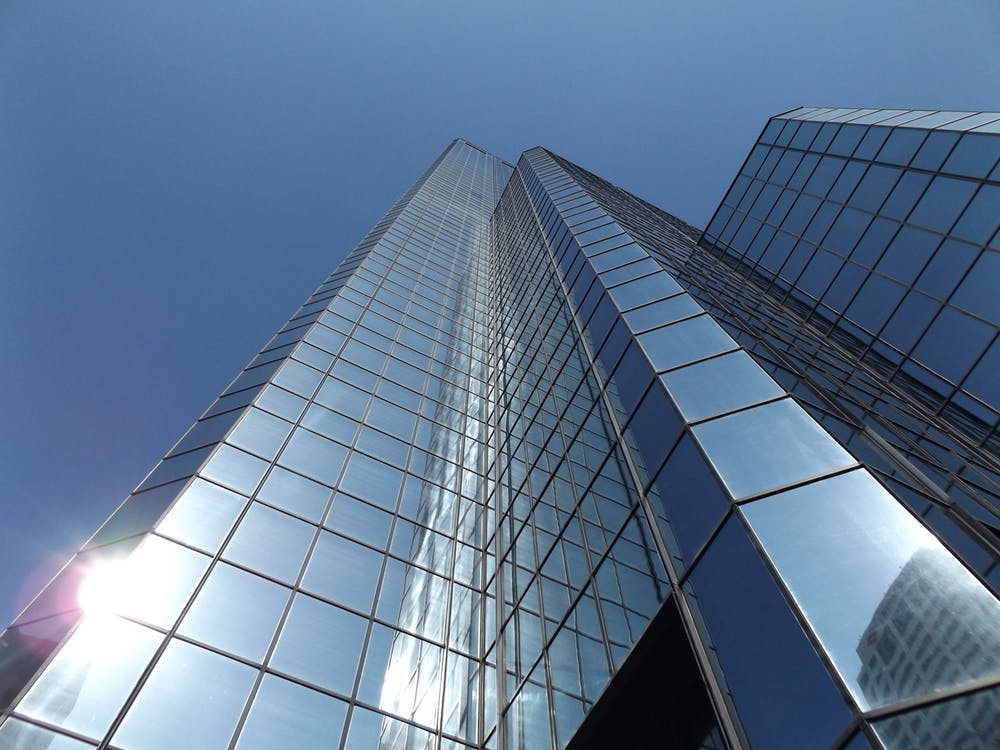 Anyone who truly cares about performance takes their preparation seriously.

Unfortunately, most professionals don't show up to a big meeting or make a significant decision with their preparation optimized. At best, you get people who rely solely on their previous experience. While popular in approach, it's not always the best plan.

Experience and expertise seem like reliable sources for preparation, yet they often cause us to wreck future success. Benjamin Franklin said, "By failing to prepare, you are preparing to fail." Many managers can finish this quote, but few live it out daily.

The best leaders are passionate about their preparation because consistent preparation is the precursor to performance.

Consistent preparation is the precursor to performance.

In coaching and developing leaders, I have identified four different ways leaders demonstrate consistent preparation. They are what I call “Preparation Zones”: Oblivious, Overvalue, Optimum, Overthink. 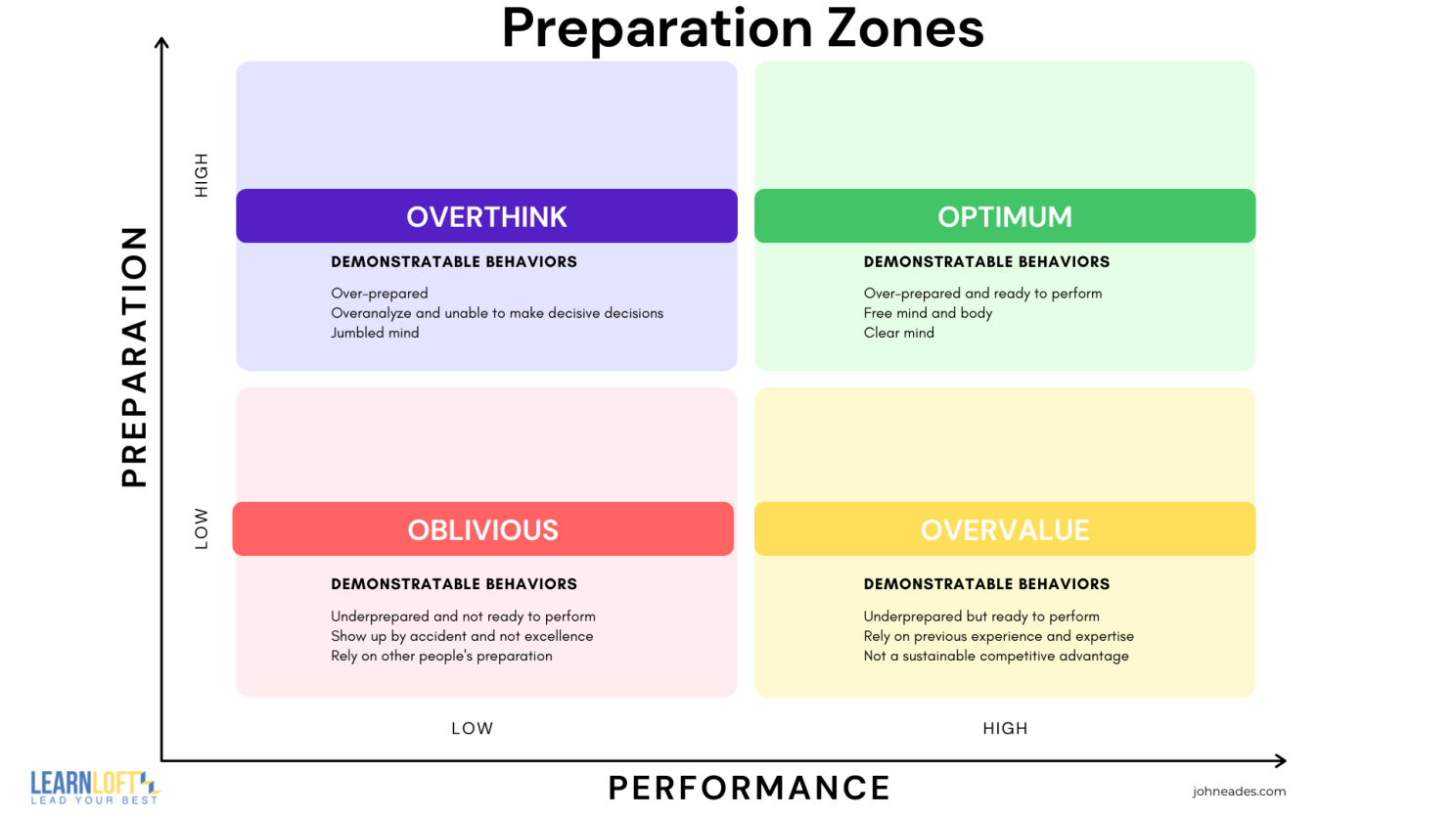 The Oblivious Zone is when you show up by accident instead of excellence. There is a good chance you don't even realize you are in this zone because it's the only way you have ever done things. You also rely on other people's preparation to carry you and the team forward.

The Overvalue Zone is when you show up and solely rely on previous experience and expertise. You don't do any additional work in advance to help set yourself up for success. There are plenty of times where this prior experience is enough to carry you through, but it's not a sustainable competitive advantage because everything changes.

The Optimum Zone is when you show up overprepared and ready to perform. When you are in this zone, you don't think a lot about your prior preparation, but it's evident the work has been done. The best athletes in the world tend to get in this zone more frequently than their competitors.

The Overthink Zone is when you show up overprepared, but cannot detach yourself from the mechanics of your preparation. This causes you to overanalyze and can create outcomes that are even worse than the overvalue zone.

It's hardly a surprise that most professionals (managers in particular) fall into the overvalue zone. However, it's the Overthink Zone that we must lean into.

Preparing to Thrive Not Survive

Preparation is defined as the action or process of making ready. I like to think that one's readiness for a future event increases the odds of a successful outcome. Each person might have slightly different methods for being adequately prepared, but they all have hard work in common. Jocko Willink said it well, "People who are successful decide they are going to be successful. They decide to study hard."

Preparation is one's readiness for a future event to increase the odds of a successful outcome.

Coming over-prepared may be enough to survive as a leader, but it isn't enough to thrive. On an episode of the Flying Coach Podcast, Kyle Shanahan, the head coach for the San Francisco 49ers, joined host Peter Schrager and Sean McVay, the head coach of the Los Angeles Rams. He said, "You don't just want a leader who is trying to survive. You want someone who has confidence, preparation, and a clear mind to do what's right even though it doesn't always work out."

These words are wise and highlight one critical leadership truth you must carry with you moving forward: Great leaders over-prepare but don't overthink.

There is a fine line between over-preparing and overthinking; this is why leadership is as much art as science. Allow your preparation to dictate the pressure decisions, but don't be afraid to make them.

The Rule of "Three And One"

I wish there were a secret formula that worked for every leader to show up overprepared, but not allow them to overthink. Unfortunately, that doesn't exist. However, you can focus on a few tactical takeaways to help you. It's what I call the Rule of "Three and One."

First, you must engage in focused work (practice, rehearsal, research, role plays, etc.) for three times the amount of time you will be performing the action. Then, while participating or performing, you only focus on one small thing in front of you.

For example, if you have a big hour-long speech or presentation coming up. To live out the Rule of "Three and One," you would rehearse the talk for a minimum of three hours; while giving it, you would only focus on the next topic ahead of you. Under no circumstance would you allow your mind to race to the outcome or how others perceive your talk.

While this might seem easy, living it out is one of the hardest things any leader can do. Rarely do we have enough time to prep for 10 minutes, much less three times longer than the interaction. If that weren't enough, training your brain to stay process-focused instead of outcome-focused is a skill very few master.

I don't know what is ahead of you where the ideas of the Preparation Zones or the rule of "Three and One" will be helpful. However, I do know that consistent preparation is the precursor to performance.

I hope you will use this as your nudge to overprepare; not overthink.