The Confidence of Americans in Institutions

The Confidence of Americans in Institutions 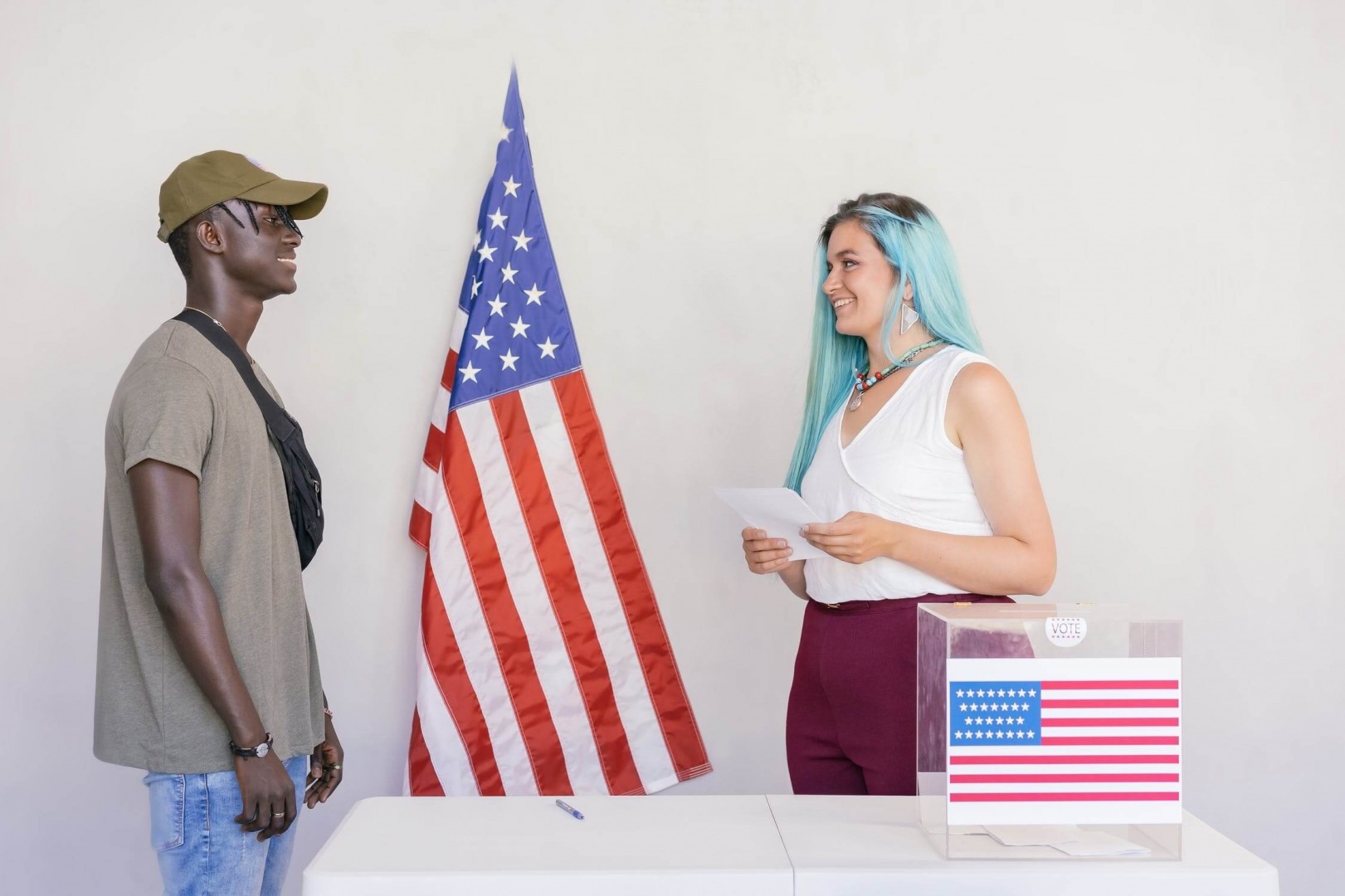 In early July, the Gallup Poll carried out an annual survey in which people are asked about their confidence in various institutions.

This figure shows the share of people who express “A great deal/Quite a lot of confidence” in each of these institutions. The overall percentage of approval is on the far right, and the breakdown by white, black, and Hispanic is shown by the dots. 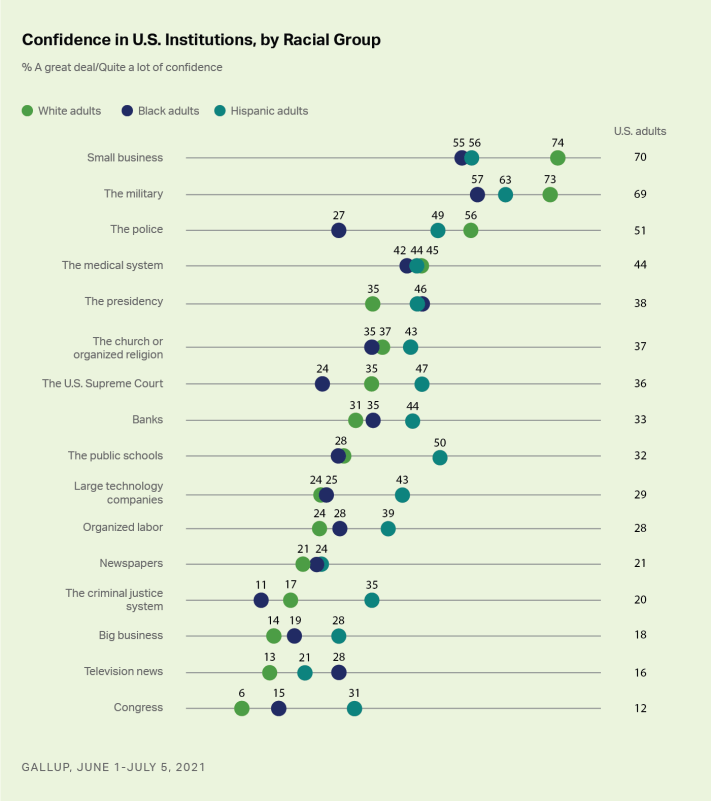 For me, figures like this lead to lots of inner conversations, and I will spare you most of that. But since I’ve been reading a fair amount about policing lately, here are a few thoughts: 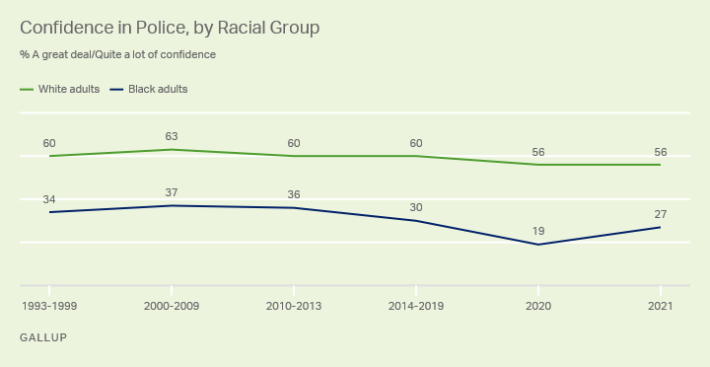 Here’s one more figure, this one showing a breakdown of the same categories by political party. 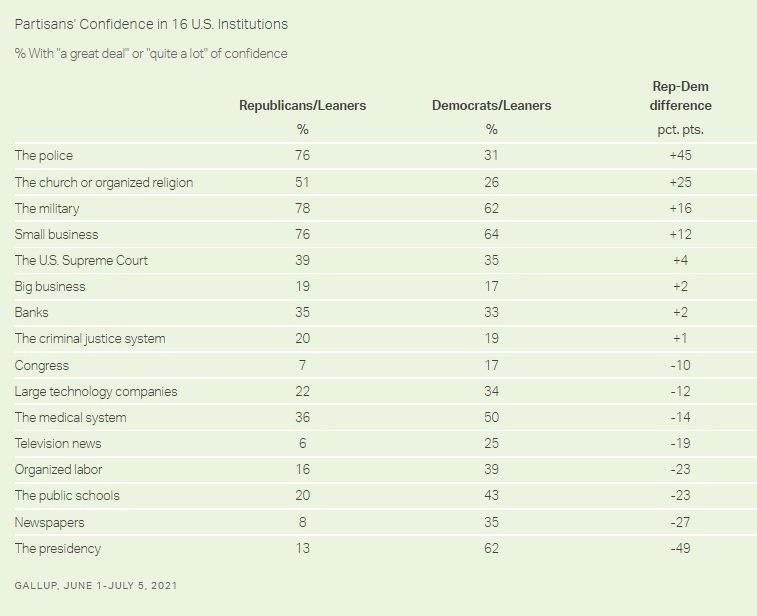 View all
Krishen Iyer Discusses “Always On” Marketing
Are You Ready to Take the Leap of Business Ownership? Hard Trends Set The Foundation
Tim Murawski Highlights The Importance of The CCO in Medical Device Innovation
Lessons From Bruce Lee for Agile Practitioners
The Evergrande Crisis Is Worse Than Lehman Brothers' Collapse: Could It Be A Tipping Point for China?
Ducci Electrical Contractors Prepare for The Future by Investing in State-of-the-Art Construction Equipment
Is Sustainable Fashion Overhyped?
Why IoT Will Dominate The Future Of Energy Generation
What Are Banks Doing to Combat Climate Change?
Is Geoengineering Research Objectionable?
How VR is Being Used for Renewable Energy Training
Whither Battery Power?
The Ultimate Guide To Understanding How Quantum Currency Works
Inflation Is Killing The Global Economic Recovery
Green Finance Can Create a Sustainable World. Here’s How.
Best Payment Methods For Your Online Business
Why The Financial Services Sector Need To Invest in Voice Assistants
Is Exness A Scam or A Legit Forex Broker?
Economic Sanctions: A Reality Check
The World Bank Kills Its “Doing Business” Report
Mulling Pandemic Advice from September 2019
International Corporate Taxation: What to Tax?
COVID-19: Lessons to Learn from the Global Pandemic
How Poverty Changed in 2020: Mixed Measures
How Long Can Vladimir Putin Stay in Power?
The Eurozone Is Going Down The Japan Way
How AI Can Be Deployed To Improve Immigration Control In Countries
How Stalin and the Nazis Tried to Copy Henry Ford
China Crackdown is About Political Control
How to Create Intelligent Governments with Artificial Intelligence
Democratizing Access to Connectivity and Digital Literacy: Enabling Every Young Person with Information, Skills, Opportunity and Choice
Stunning News about Diet and Weight
How Tesla is Using Big Data: Benefits & Challenges of Big Data in Self Driving Cars
Which Jobs Will Survive Artificial Intelligence? Here Are The Jobs That Will Remain & Disappear Following The AI Takeover
What's Fundamentally Wrong With Machine Learning?
On The Nature of Vaccine Reticence
What Effective Leaders Do and Don’t Care About
HRM in the Middle East: Challenges & Future Outlook
Are Governments Ready For Artificial Intelligence? Role of AI in the Public Sector Post Pandemic
If Donald and Joe's School Principal Was an ER Doc!
How to Determine If Respiratory Disorders Qualify for LTD Claims?
Peerless Goalscorer Greavsie Played like Messi before Messi
Can Augmented Reality and NFTs Work Together?
React Native vs Native App Development (iOS & Android): Pros and Cons To Build The Perfect Mobile App
How To Design The Best Landing Page: 5 Critical Tricks To Improve Conversion
Technology as Empowerment 5G for Good
5 Cloud Computing Trends That Are Playing A Major Role in 2021 & Beyond
5 Web Design Resources That Will Inspire Your Website