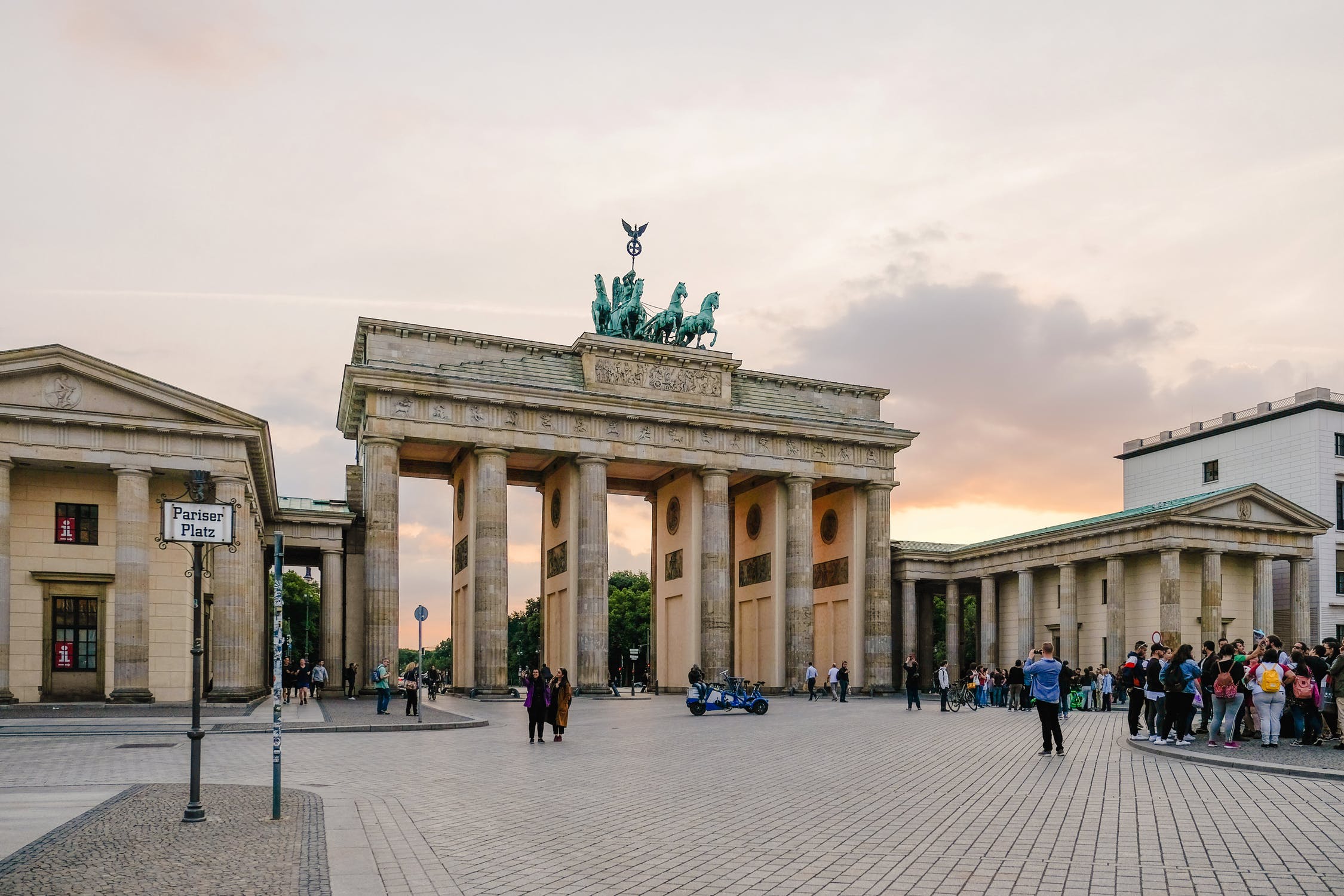 On 9th November 1989 the world history took a turn. In a peaceful revolution, the Berlin Wall was pulled down.

This triggered a number of events which removed the “Iron Curtain”, led to almost demolition of communism, and disintegration of Soviet Union. It ended the cold war. It changed the autocratic political system of communist parties in the East Block and promoted democracy and liberalism. Cold war ended but the world became unipolar.

Now for the first time after 30 years, curiously again, undemocratic, communist China is challenging the Western democracies. And this time the West is divided and not standing behind the USA.

After losing the world war in 1945, Germany was an occupied country. Western zones were occupied by the allies – France, the USA, and the U.K., and Eastern zones by the USSR. Berlin was a divided city with a 37 Km wall passing through the residential areas of the city. The wall was built in 1961.

The allies were committed to de-Nazification, de-militarization, de-industrialization and democratization of Germany. But then they moderated their stand and de-scaled. It did not turn out in to another Varsailles. Luckily for Germany, the USSR took some machinery along, and the USA and the UK - some scientists and trade secrets. Majority of its industry remained intact. Factories were destroyed, but the standards, production processes, manufacturing skills and the brainpower stayed with the people. After Marshal Plan and Currency Reforms – West Germany started rebuilding the “Vaterland”. During 1950’s came the so-called “Wirtschaftswunder” or the economic-miracle. Federal Minister of Economic Affairs – Ludwig Erhard brought “Social market-capitalism”. It was liberal, social, solidarity-driven capitalism.

Germany was destroyed and a lot was to be rebuild. Population in the West had depleted during the war but was replaced by German refugees coming from East Germany, Poland and Czechoslovakia. Germans have been moderate, down-to-earth, spendthrift, skilled, educated and a disciplined and organized society. The economic growth during the “Wirtschaftswunder” stayed at around 8% - comparable with China until recently. No wonder that the country rose like the phoenix from the ashes. Often the solutions to major economic problems are simple – honest and strong political leadership, mutual trust and solidarity, pragmatism, hard work and discipline brought Germany where it is today.

The country again kept engaging with communist East Germany, USSR, Western allies on the question of reunification but did not push for it. Patience, persistence and Realpolitik of the then Chancellor Willi Brandt eventually reunited the two Germany’s within 45 years – not too long a timespan in the life of a nation.

Germans are critical of themselves as well as of others. You might see a number of reports which would say that – there are still gaps between the West and East Germany. Yes, there are. But one should see how the efforts have been to reach the parity at the earliest. West Germans transferred more than EUR 2 trillion over the last 30 years as “Solidarity Surcharge”. In Germany, nothing happens without complaining. But so long as it’s a rule, people continue to contribute to the common national goal. And that has contributed in pulling East Germany out of its situation in 1990 - in less than 30 years.

Is the East German GDP at par with the West? Certainly not! But then why must it be? Is it not greatly admirable the kind of progress East has done with the solidarity and support from the West?

Not surprising that in a PEW Research carried out in the beginning of the year, an overwhelming majority said that the reunification is a positive development. It had a good influence on their living standards, health care and national pride. It also led to improvements in family values, spiritual values and Law & Order.

The most remarkable is the satisfaction score of the East Germans. They felt threatened, confused and disillusioned at the time of the reunification. Their satisfaction has grown four-fold in the 30 years.

What Happened after the Fall of the Wall on 9th November 1989?

East German industrial companies collapsed as they ran on Government funding as social enterprises – similar to many Public Sector Units - in India. They were never commercially viable. Property laws needed to be redrafted. Infrastructure in the East had collapsed. Roads, Autobahns, Communication networks, energy supplies needed to be restored. Pollution was severe. People had to be re-trained, reskilled. Many had learned skills which were overnight outdated.

East Germany was, on a positive note, more egalitarian and had higher gender equality. Whole-day schools took care of the children. At the time of reunification 55% Western women were gainfully employed, in East Germany – 67%. Western women earned 21% less than the men, “only” 6% women did so in the East.

Industry was closing in the East, young people were moving to the West. East was getting stagnated, and fell in a decline. Many states were marred with ghost towns.

In March 1990 Christian Democrats of Chancellor Hemut Kohl won the general election with 40% votes. In July 1990, currency reforms took place with the East getting 1:1 Deutsche Mark for their OstMark. This was way higher than the OstMark’s intrinsic value. As a flop side, everything in the East became too expensive overnight. But obviously, every thing a common man needs, became available on the shelfs of supermarket eradicating the chronic shortages of food products. It was similar to what had happened in the West when Deutsch Mark was introduced in 1949.

In September 1990 the “2+4” Conference (West Germany, East Germany and the four allied “occupiers” of Germany – France, The UK, the USA and USSR) was concluded paving the way for East Germany or German Democratic Republic (GDR) formally joining the West Germany or Federal Republic of Germany (FRG) under the Article 23 of the Basic Law (similar to Constitution) on 3rd October 1990.

Since 1990 the 3rd October is celebrated as a holiday – Reunification Day or Unity Day. In 2004 the then Chancellor Gerhard Schröder tried to remove 3rd October as a holiday under the pretext of economic reason / loss of productivity, and put it to the 1st Sunday of October every year. Remember, the unemployment in East and West had peaked around that time. But his proposal was out rightly rejected and 3rd October continued to be the national holiday.

Following concentration of power and all institutions in Berlin during the Nazi times, Germany had intentionally developed a decentralized and dispersed authority structure. Following that the Germany capital was in a small town on Rhine by the name Bonn. An American journalist in 1980’s has described the town of Bonn as “half the size of Chicago cemetery, and twice as quiet.” In 1991 in an emotionally loaded bi-partisan vote (everyone was to exercise according to own conscience as there was no party-line.) it was decided to move the capital to Berlin from Bonn in a 338 to 320 vote.
In 1990, Angela Merkel – the daughter of a Protestant priest in the communist East, and a PhD in Quantum Chemistry joined politics, and worked as Deputy Spokesperson of the East German CDU leader on 3rd October 1990.

Vladimir Putin on 3rd October was working as the KGB agent in Dresden/Germany.

The question remains – if the Berlin Wall came down on 9th November 1989, why 9th November was not celebrated as the Reunification day. Well, Germany had some bad history with that date. On 9th November 1923 Hitler tried the Munich Beer Hall Putsch – a first attempt by Nazis to seize the power, On 9th November 1938 the Nazi pogrom known as ‘Kristallnacht’ (The Night of Broken Glass) saw Jewish shops and synagogues attacked, and the death of hundreds of Jews. Luckily, the history does not always repeat itself!

A liberal, democratic, inclusive Germany, presently, is trying to take the lead, on behalf of the European Union, to form an alliance of liberal, democratic countries for a rule-based world order. It finds India as a close partner in a world with power centres concentrated around the unpredictable USA and an aggressive, dictatorial China. Under these circumstances, India and Germany are proving to be natural allies to cooperate in social, cultural, economic, educational, scientific and environmental matters.