Dwayne Johnson, who’s one of the biggest box office stars in Hollywood, has come a long way from his family being evicted right off the island of Hawaii, to his films earning over $10 (US) billion worldwide.

With movies like Moana (2016), Rampage (2018), Skyscraper (2018), the Jumanji franchise, along with the Fast & Furious franchise, Canadian-American Johnson (48) realized a childhood goal: “By the grace of god, I bought my folks their first house. I was rambunctious kid, who’s had his ups and downs, but they were always there for me.” Johnson, whose iconic wrestling father Rocky Johnson was born in Amherst, Nova Scotia, is the executive producer and co-star in a wonderfully real and funny series, Young Rock, saying that he hopes the family-oriented series “helps viewers find a few lessons that we’ve learned as a family, along the way.” Johnson, who says he loves being “surrounded” by his ladies (wife Lauren and his three daughters), is proud of his Canadian connections, gaining his Canadian citizenship through his father in 2009, and also playing in the Canadian Football League.

But the busy family man and world traveler hints that one day he would consider running for political office, even the Presidency, but offering, “You’ve got to go to ‘school’ and learn because any office, I would treat with such respect.” Amiable and always smiling Johnson talks to us about his early struggles, the joy he feels in making movies for fans, his commitment to Make-A-Wish, and about being compared to Johnny Depp from 21 Jump Street. 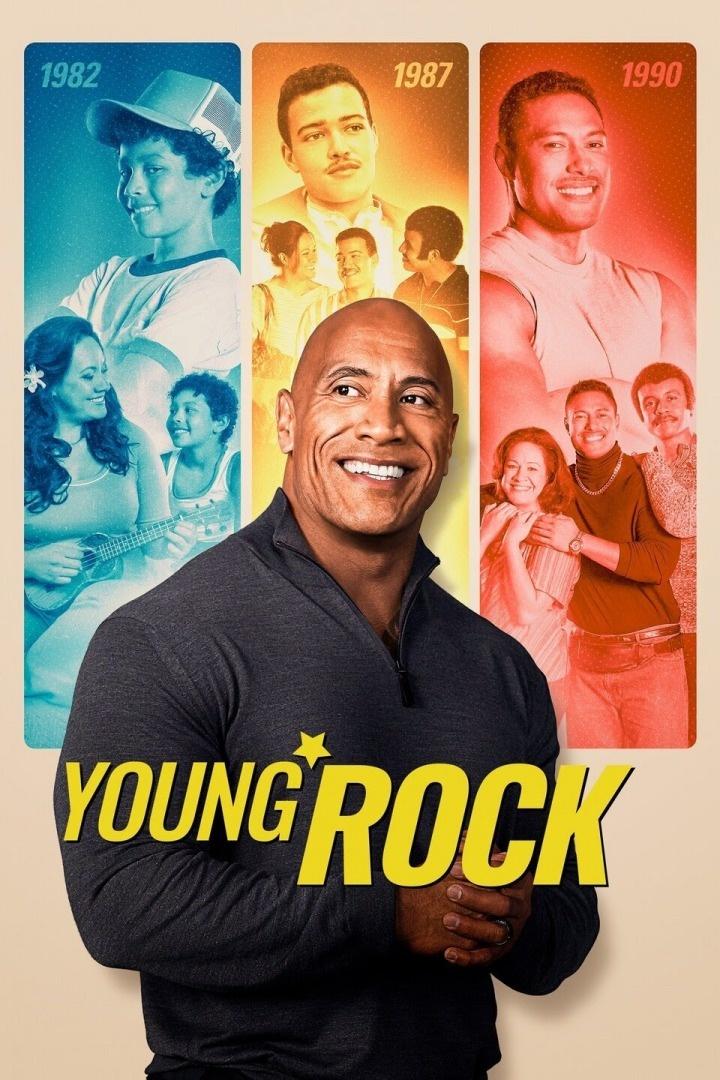 What Do you Hope Viewers Get from Telling your Amazing Story in Young Rock?

I hope people get a good insight into my life and have fun. It started with my father being an internationally-known wrestler, and the goal is always to entertain. Way back into my childhood, that’s where it began, so Young Rock is all about that mission to entertain and where it all began with twists and turns along the way.

Part of the Early Story you tell was During Challenging Times, Right?

We were evicted from Hawaii, and forced to go and live in Nashville. Back then, in Hawaii you could get a license at 14. So, I turn up in Nashville, driving a car, at 15, with a full mustache, 220 pounds and 6-4, I know, huge. And I didn’t look like anyone else in Nashville.

Did “Soulman Rocky Johnson” Want You to Get into his Wrestling Field?

It’s odd but my dad didn’t want me to get into wrestling, and we used to argue because he was honest and wanted more for me, not just what he had—we did go through tough times, never owned a house. But I did get into wrestling and it was a springboard for everything else. Thing is, not having much, inspired me to want more and never be too full of yourself.

How Much Fun Was it Casting all those Larger-than-Life Characters from the WWF/WWE in the Series?

We go through the gamut of all these amazing moments and experiences including the totally unpredictable world of professional wrestling. So, we had to cast all those bigger than life real characters like Randy Savage, Junkyard Dog, Andre the Giant, and more. I think the audiences are going to have fun and enjoy all these characters.

Can You Tell us About Your Friendship with the Wrestler Andre the Giant?

I have a lot of cool stories about Uncle Andre. Yes, he came to my school for show and tell, the kids went crazy. I had a wonderful friendship with him, and would climb all over him, he was my big bud. He was so respected in the world of wrestling, and as my “uncle” it was important for him that I learned about the concept of respect, for other people but also for the world he worked in, professional wrestling.

We Hear Your Mother, Ata, Is Your Biggest Fan?

My great support was my mom who kept the family together but whose big dream was to allow me to live my dream. But the whole family was also involved, as my grandmother was the first female wrestling promoter.

Were You a Saint or Sinner Growing up?

Basically, as a kid I was a good boy, but I was so full of energy, asking questions, wanting to do this and that, so kind of a pain in the butt.

There was a time when we got evicted from our place and from Hawaii when I was about 14. We were living paycheck to paycheck, and then I was getting arrested and into trouble, trying to stay on the right path. It was a phase where I was angry a lot.

So, You’ve Always Been on the Road, Right?

Early on, there wasn’t a consistent home life with all the travel. And, as a teen I went to a handful of different high schools. I moved around so much and because I was bigger than other kids, I had my own beat-up car, which I bought from a drug dealer, and I had a full-on moustache, so people were saying I was an undercover cop or something.

There Was a Reference to 21 Jump Street and Undercover cop, Johnny Depp in the Pilot, Right?

The show was popular at the time, and fellow students saw me as a real-life narc, an undercover cop. Bradley Constant crushes it playing me at that age. Even though it’s a comedy, Bradley has to step into those 15-year-old shoes where I was as a complicated kid getting into trouble. But I asked Bradley to find that little voice, that thing way down that allows you to be a good kid, because I was still a good kid, just angry and looking to find my way. And Bradley really nailed it, he found that voice.

What’s Your Take on Parents and Kids?

Throughout the tough times, and then when I got success, my parents helped me stay grounded. Now, my own family and my kids do that for me. As all parents know, kids are the great equalizer to everything in life. If you think you’ve got everything under control, they will come at you with something. But they will balance you out and humble you.

How Do You keep in Shape on the Road?

I take my custom gym with me. Any place I shoot on location, I’ll bring my equipment. Sure. gyms basically have the same equipment, but it’s hard to work out in a public gym, with a lot of people around. So have gym will travel.

Which Film Roles Inspired You Growing?

Harrison Ford as Indiana Jones in those great adventure films. Indy kicked some butt but he had that crooked smile and charm. And, he loved and celebrated beautiful women,

Why is Your Production Company Called Seven Bucks?

An early goal of mine, especially when I played college ball at Miami, was to play in the NFL and when that didn’t happen, I went to the CFL in Canada. So, I played there but got cut. So, I went back to Florida and then to Tampa where dad lived. I had 7 dollars in my wallet, that’s it. And, that’s the name of my production company, Seven Bucks Productions. To remind me.

How Do You Manage to do all the Press You Do?

I make time because it’s the most important relationship, talking to the people, my fans. And, I love to make movies for the world to enjoy.

Where Did You Learn to be So Positive?

Early on back in the lean times when I was getting in trouble, this quote stuck with me: “It’s nice to be important, but it’s more important to be nice.” Being nice and kind is literally the easiest thing we can do. And even though I got blown off by some people when I first came to Hollywood but I learned that if you have an opportunity to make someone’s day, just do it.

What’s Your Longtime Relationship With the Make-A-Wish Foundation and Kids?

In 1983, my father was one of the first to grant wishes for the Foundation, and I saw the impact of that, so Make-A-Wish continues to play a big part in my life. For every movie I do, there’s usually a nice sized list of kids who want to meet me. So, I’ll turn the set into like maybe Willa Wonka factory and we create all these great activities for the kids to have fun, and have their dreams come true. I’m in this position and any opportunity I have to give back, I do.

View all
The Big Data Approach to the Big 5 Assessment
Enabling Your Data Driven Organisation - Part 2
Enabling Your Data Driven Organization
Action is the Foundational Key to All Success - But Knowing Which Action to Take is Half the Battle
How GDPR & Data Protection Act Affect the Marketing Industry
Inflection Point July 2021
9 Best Ways for Businesses to Reduce Carbon Footprint
Sustainability: How Feasible Is It For Us to Stop Buying?
How IoT and AI are Protecting Wildlife From Poachers
Regenerative Development: The Next Step Beyond Sustainability
4 Challenges of The Carbon Credit System and How Blockchain Can Reduce Carbon Footprint
6 Sustainable Swaps for an Eco-Conscious Home
The Delta Variant & Bitcoin’s Looming Opportunity
How Can the Use of QR Codes Help Banks Simplify their Daily Transactions with Clients?
The Definitive Guide To Hedge Fund Software
Bond Boom Bolsters Bitcoin’s Bottom Line
A Guide On How To Choose The Right Loan For You
Understanding the Role of Artificial Intelligence in the SPAC Bubble
Can Administrative Health Care Reforms Get the Administrative Cost Advantages of Single Payer?
The Next Crisis Will Come from Cryptocurrencies
Has the Health Crisis Killed Music For Good?
Odebrecht: “The Largest Foreign Bribery Case in History”
Ransomware Attacks: No Longer a Matter of “If,” but “When”
The Potential of Geothermal Energy
How to Create Intelligent Governments with Artificial Intelligence
The Confidence of Americans in Institutions
Cuba: The Dictatorship And The “Blockade” Lie
The Role of AR, VR, AI and Robotics in Future Conflicts
Why Countries Need A National Artificial Intelligence Strategy
Learned Hand: “The Spirit of Liberty is the Spirit Which is Not Too Sure That It is Right”
Mathematics of Machine Learning: Data, Algorithm, Model, and Causal Learning
What is the Difference Between The Learning Curve of Machine Learning and Artificial Intelligence?
Can Artificial Intelligence Be Racist & Sexist Like Humans?
Meat: Less is More
Debunking The Discovery of all Discoveries
Why Healthcare Is Still Not Ready For Artificial Intelligence?
From Harry Potter to Miracle Workers, Daniel Radcliffe dishes on Fame
Caffeine and Other Impediments to Sleep
Why It's Time to Rethink Education and Change the Way We Teach and Learn?
Do You Show That You Care?
Why Make An Excuse For An Error That You Haven't Made?
Consistency is Key
How Blockchain Can Be the Key for Smarter Welfare Distribution
Using AI in Application Performance Monitoring
IoT and 5G Convergence
Trends in Smart Home Technology
The Future of Job Training – Augmented Reality
Building Back Stronger – Security as the Foundation for the UK’s Digital Transformation

The Delta Variant & Bitcoin’s Looming Opportunity
How Blockchain Can Be the Key for Smarter Welfare Distribution
How Can the Use of QR Codes Help Banks Simplify their Daily Transactions with Clients?
From Harry Potter to Miracle Workers, Daniel Radcliffe dishes on Fame
The Big Data Approach to the Big 5 Assessment