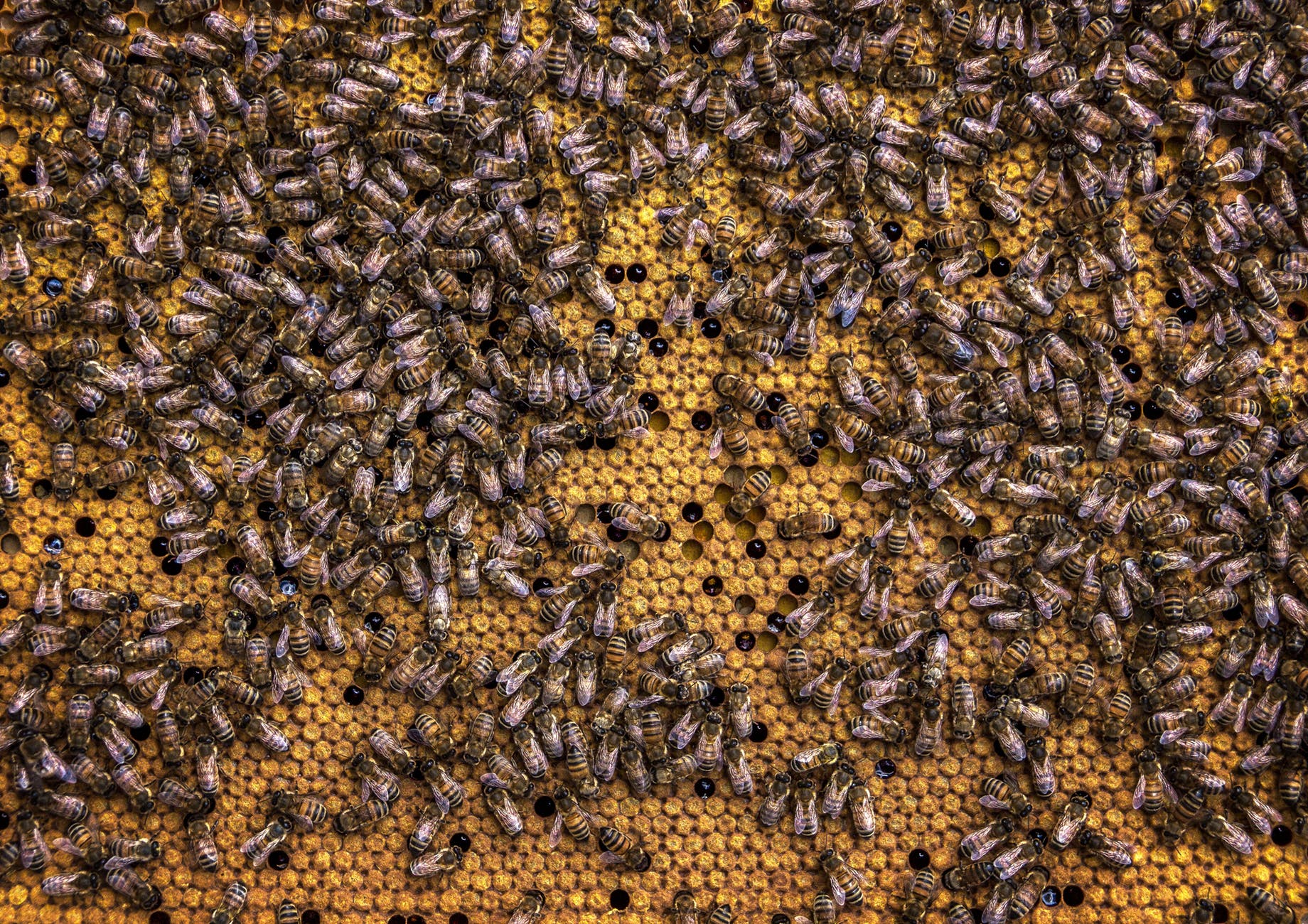 The beekeeping industry matters more to economists than those who are not buzzing around the fields of economics may suspect. In the 1950s and 1960s, it was common for economists to use bees as a theoretical example of a situation where markets would not work well. The underlying argument was that it would be hard for beekeepers and growers to agree on how to price pollination services. This argument bit the dust, hard, when a practically minded economist pointed out in the 1970s that in fact, such agreements between beekeepers and growers had been  commonplace for decades. I offered a quick overview of this this intellectual history in "Do Markets Work for Bees?" (July 10, 2014)

More recently, colony collapse disorder offered a new challenge for thinking about bees and markets. But it turns out that beekeepers have tried-and-true techniques for creating more hives: for example, by splitting an existing hive.  There's a market for buying a starter-kit "package" of bees: about 12,000 worker bees, plus a queen, totals about three pounds and sells for $90. I describe how the number of bees has not diminished, despite higher die-offs from colony collapse disorder, in "Fighting Colony Collapse Disorder: How Beekeepers Make More Bees" (August 5, 2017)

For those looking for a more recent update and overview of the beekeeping industry, Peyton M. Ferrier, Randal R. Rucker, Walter N. Thurman, and Michael Burgett of the US Department of Agriculture are at your service with "Economic Effects and Responses to Changes in Honey Bee Health" (Economic Research Report Number 246, March 2018).

I'd say there are two particular challenges to the market for bees in recent years. One is the ongoing presence of colony collapse disorder, so that beekeepers have had to invest more in replacing hives that have died off. The other is the rise of almond crop in California. This crop needs pollination badly, and needs it pretty much all at the same time early in the season, so demand for bee pollination services has gone up. Moreover, bees who pollinate almonds apparently don't make decent honey during that time. This rise in pollination revenues means that beekeepers as a whole now make slightly more money from pollination than from honey--reversing a long-standing pattern.

As those who are constantly on the lookout for an example for an intro econ class will note, we're talking about a fall in supply of bees (from colony collapse disorder) and a rise in demand (from more pollination of almonds). One might expect a rise in price, but while the price for almond pollination has indeed risen, other pollination prices have not. As the report says near the end: "Appropriate here is the adage: `High prices are the solution to their own problem.'” In this case, higher price brought forth reactions from both beekeepers and bee-users. Also, any higher costs of pollination are relatively small in the context of the overall price of food, and so can be passed down the production chain to retail consumers with little adverse effect.

Here are some comments from the report:

On the Number of Honeybee Colonies

"Since 2006, annual winter losses of managed honey bee colonies have averaged 28.7 percent, approximately double the historical winter mortality rate of 15.0 percent. These elevated losses have raised concerns that agricultural and food supply chains will suffer disruptions as pollination services become more costly and less available.  ... Despite higher winter loss rates, the number of U.S. honey bee colonies has remained stable or risen between 1996 and 2016, depending on which of two data sources is considered. Winter loss rates have no negative correlation with yearly changes in the number of U.S. colonies at the national or State level, and loss rates have a positive correlation with the rate of colony additions, which may reflect strategies used by beekeepers to manage colonies." 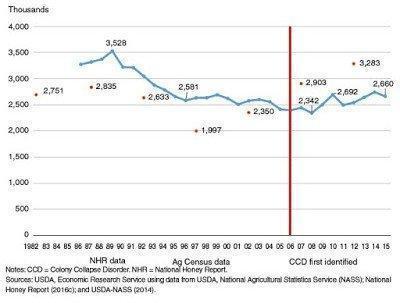 "The high share of almond service fees in pollination revenues can be attributed to the following: (1) almond fees are substantially higher than fees for other major crops, and (2) almond pollination accounts for 61 percent of all honey bee colonies rented and 52 percent of all crop acres that pay fees for pollination services. A primary driver of the increased share of pollination fee revenue over time is the dramatic expansion in almond acres—from 419,000 bearing acres in 1988 to 940,000 in 2016.

For Many Crops, Growers Have Some Alternatives to Honeybee Pollination

"While the honey bee pollinates a wide variety of crops, in certain applications, other pollinators are preferred. Notably, the alfalfa leafcutter bee (ALCB, Megachile rotundata) is used widely as a pollinator in commercial alfalfa seed production owing, in part, to its different physiology (Pitts-Singer and Cane, 2011). The alfalfa flower includes a trigger that a pollinator must trip to release its pollen. Compared to ALCB, honey bees are small and averse to the strike of the trigger mechanism. ...

"ALCB are sold in their pre-pupal stage, and the bees’ maturation and emergence as an adult insect are managed with temperature to coincide with the alfalfa bloom (Pitts-Singer and Cane, 2011). When sold in gallon quantities (roughly 10,000 live bees per gallon), typical stocking rates are 1 to 4 gallons per acre ... While ALCB are raised domestically, in 2016, the United States imported $18.8 million worth from Canada, the sole import source. ... Since 2012, ALCB imports have grown steadily in volume terms, suggesting that imported bees are not being recovered to use in subsequent years. If recent ALCB import values exceeding $18.8 million over each of the last 3 years represent single-use purchases of pollination services, then the alfalfa seed crop represents the second-largest user of paid pollination services by value after almonds. ...

"The farmer’s unresponsiveness to potential increases in pollination service fees enables beekeepers to pass along higher beekeeping management costs to farmers. Similarly, the retail food producers’ general unresponsiveness to wholesale food price increases enables wholesale producers to pass along higher costs of pollination services to retailers. In short, the same mechanisms that mitigate much of the impact of higher management costs on beekeepers also mitigate the impact of higher wholesale food production costs on food producers."

"Johnson (1973) suggests that the first recorded renting of colonies for pollination in North America was in 1910, while Lindquist (2016) states that the first bees were rented for pollination in New Jersey in 1909. Olmstead and Wooten (1987) indicate that plum and prune growers started renting hives for pollination services `beginning around World War I' and that their success led to the development of similar practices by growers of other fruits and nuts. Rucker and Thurman (2010) provide accounts of migratory beekeeping for the purpose of following the bloom and producing honey going back to the 1870s and suggest that there were commercial beekeepers who “were mobile, migratory, and large by the 1920s” (p. 9). They also provide several accounts of the provision of pollination services for pay in the 1920s, noting that many of the accounts are from California, and the extent to which the practice was widespread at that early date is unclear."

As I noted before, those looking for a supply and demand classroom illustration could do worse than spending some time with the bees.

View all
7 Key Challenges Facing the Recruitment Sector in the Pandemic Era
Proven Hacks To Get the Most From Your Employees
6 Ways to Future-Proof Your Business
The 8 Essential Elements of Trust in Business
What it Takes to Set Up a Successful Taxi Firm
How Businesses Can Leverage AI, IoT, AR, VR, Blockchain and Big Data to Retain Customers
Electrify Everything: Some Limitations of Solar and Wind
Dispose of Masks Properly, Or Else
Why Communicating Sustainability Is Harder Than You Think
5 Post-COVID Energy Strategies
Dhaka Muslin: The Lost Ancient Fabric Back From the Dead
How to Become a Solar Technician: 4 Useful Tips to Start Your Career
P2P Lending vs Traditional Lending
Can You Passively Make Money Using Cryptocurrency?
Banking on Bitcoin Against Inflation
What is a Dogecoin Worth?
Bitcoin Miners Are On a Path to Self-Destruction
7 Ways to Uncover Revenue Streams in Your Business
The US Productivity Slowdown After 2005
The IMF And The Jobless Recovery
Evolving Patterns of Innovation Across States and Industries
Policy for the Next Pandemics
Why Joe Biden’s $2 Trillion Infrastructure Plan May Fail
Nature as Part of the Stock of Humanity's Wealth
Covid-19 and Fake News: Exponential Rise of Conspiracy Theories and How to Prevent Misinformation
UK Budget 2021: Corporate Tax Rise, VAT Cut for Hard Hit Sectors Extended & Income Tax Thresholds Frozen
What If George Washington Lied?
Judges and Ideology
Covid-19: All Travellers Arriving in the UK To Be Tested Twice Starting From Next Week
Inauguration Day: Joe Biden is Officially the 46th US President
How the Internet of Things, Artificial Intelligence and Blockchain Are Transforming Precision Medicine
How Virtual Reality is Assisting Historians and Archaeologists
The Sense, and Dollars, of Food as Medicine
Data Storytelling with Population Visualizations
The Science of Mirroring
About Death, Waste, Getting Unreal and Clubhouse
Bridging the Gap Between Art and Business
Leadership: How You Can Be A Business World Hero
3 Ways to Earn Money with Advertising
Covid-19: Restaurants & Pubs, Hairdressers, Gyms, and Non Essential Shops Reopen as Lockdown Eases
6 Actionable Content Marketing Tactics for Digital Marketers
Were All of Them Moonshots?
Bitcoin Surges to New Record Ahead of Coinbase IPO
Implementing a Long-Term Cloud Strategy with Independent Scaling
4 Critical Enterprise Mobility Challenges and How To Overcome Them
Stopping the Runaway Ransomware Epidemic
Cybersecurity: Will AR & VR Open New Doors for Security and Privacy Challenges?
Exploring The Applications of Extended Reality in Healthcare, Real Estate and Retail