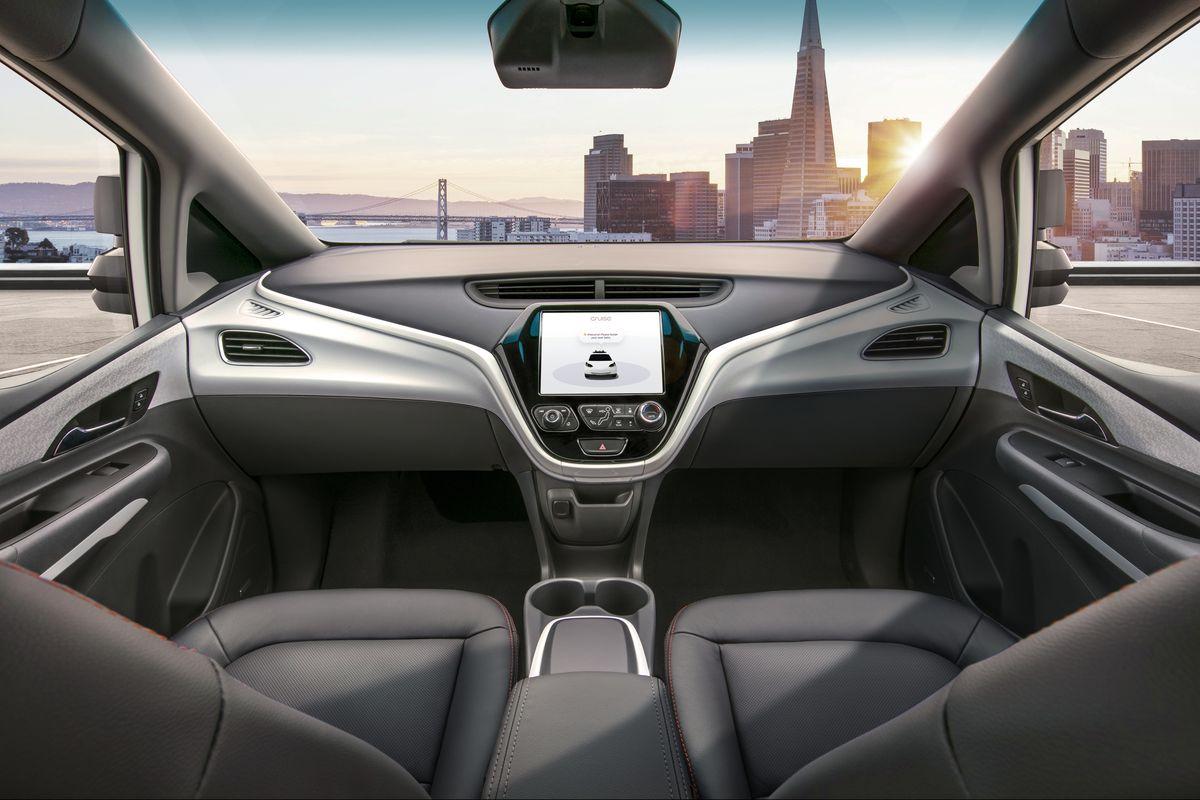 When it comes to peering ahead into the autonomous vehicle future, some crystal balls are better than others. I recommend the recent report written for a group called SAFE by Charles Carson, Erica Groshen, Susan Helper, John Paul MacDuffie, W. David Montgomery, and Richard Mudge, America’s Workforce and the Self-Driving Future Realizing Productivity Gains and Spurring Economic Growth (June 2018).

(The authors were brought together as an expert panel by a group called Security America's Energy Future. According to its website, "SAFE unites prominent military and business leaders to develop and advocate for policies that improve America’s energy security by significantly curtailing our dependence on oil and promoting responsible use of our domestic energy resources." It seems to do this mainly by sponsoring reports conferences and reports from expert committees, like this one.)

Here's a list of social gains, with the big ones clearly being accident reduction and consumer time. 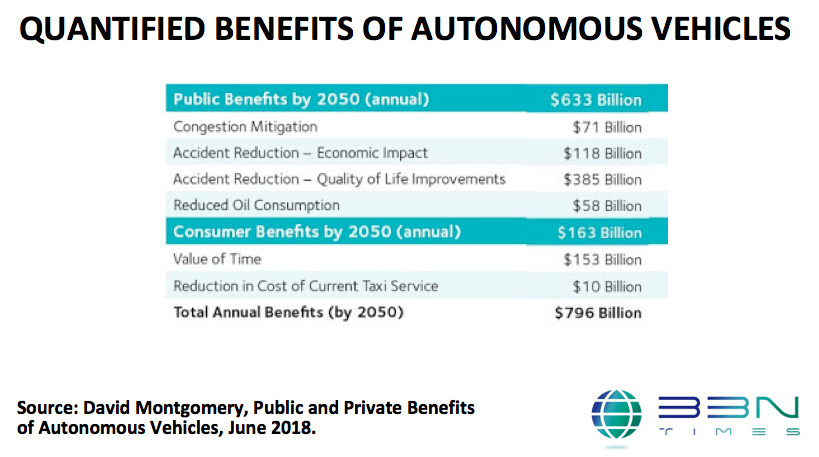 As the report notes: "It is highly likely that AVs will revolutionize the American economy in ways that have not been seen since the mid-20th century. In fact, it is hard to foresee any technological or other change on the horizon that can contribute more to economic growth and productivity. ... AVs represent arguably the best opportunity to reduce America’s oil dependence. while also providing low-cost mobility."

But the most intriguing and controversial issues around autonomous vehicles are not about the possibility of gains, but rather involve involve likely shifts in jobs, patterns of living and commuting, vehicle ownership (or not), and even cityscapes. By their nature, such patterns are hard to foresee. The report offers some discussion of the Interstate Highway System, where building started in the 1950s, as an example of a broad social investment with high and not wholly predictable results.

"For example, investments in the construction of the Interstate Highway System have returned more than $6 in economic productivity for each $1 invested, by cutting journey times for both goods and labor.  ... [T]he Interstate Highway System defied linear economic thinking, as these technologies provided significant benefits far beyond their originally-designed impact that conventional analysis failed to capture. Traditional economic studies for the interstate network showed that only 33 percent of the mileage could be justified based on traffic in 1956 and claimed that at most one road over the Rocky Mountains made economic sense. Eventually, growing demand led to three highways being built. It is remarkable that, despite an average rate of return on public investment of between 50 and 60 percent, economic benefits did not even  rank in the top three factors cited by supporters for the highway network’s construction when the enabling legislation was passed in 1956.

As early as 1970, for example, the interstate network had reduced journey times by 10 percent on average, a benefit that rippled through the economy. These technologies also help reduce a wide variety of costs associated with traffic and travel. Tractor-trailer operating costs are estimated to be 17 percent  lower on interstate highways than other highways, for example, which in turn creates economic benefits for businesses that are passed on to consumers. The broad-based gains provided by these technologies are rarely anticipated in advance—contrary to predictions, logistics companies and vehicle manufacturers were not the main beneficiaries of the Interstate Highway System. More than half of all benefits to private industry were realized in services and non-manufacturing. ...

"Another illustrative example is the role of the interstate network in enabling significant and unanticipated growth in retailers. When combined with the deregulation of trucking in 1980, the Interstate Highway System allowed the freight industry to meet the needs of the emerging “big box” distribution and retailing models of Walmart and Target, bolstering their national competitiveness in the process. ...

It seems plausible that the range of benefits and effects from autonomous vehicles could be equally eclectic. For example, posit that AVs make travelling easier (less congestion, greater flexibility, and the ability to do something else while riding). It seems plausible that people could more easily go a little further to reach jobs, which means that low-income people in parts of a metropolitan area without many nearby jobs might find it easier to reach jobs elsewhere in the metro area.

For example, the report mentions mobility benefits: "Those previously unable to drive themselves due to a disability, an inability to afford a car, or other mobility issues would also benefit from AVs. Approximately 9 million Americans have a medical condition that affects their mobility, and of these about 8 million have reduced their daily travel. Almost 15 million people have a medical condition that affects their ability to drive, with 11.7 million people reducing their daily travel as a result. This lack of mobility leads to social isolation, reduced economic opportunities, and an inability to participate fully in community life."

Access to jobs and shopping could expand, too: "The lower cost of travel provided by AVs has the potential to enable people to travel farther, significantly increasing access to job opportunities as well as a broader range of retail goods and services. This in turn expands customer bases for local stores, increases the job market for workers and widens the talent pool for employers, creating productivity gains in the process. Existing studies have shown that a 10 percent improvement in access to labor increases productivity and regional output by 2.4 percent."

If there was an ability for people to be delivered downtown to shop or work, with a low-cost and flexible method that delivered you where you want to go without didn't needing to drive or park, that would be a dramatic change. Imagine further that after these autonomous vehicles have dropped you off, they don't need to park nearby. They could go off to a spot outside the main downtown where they could recharge their electrical batteries. Thus, cities could substantially reduce space now devoted to curbside and ramp parking.

What about potential job loss? The report emphasizes that any such effects aren't going to  happen soon, or all at once. In terms of numbers, the main job category affected by autonomous vehicles is truck drivers. In turn, the question with truck drivers is whether autonomous vehicles are likely to replace a human driver from door to door, or whether the truck-driving market will split into one with human drivers within metro areas who get the trucks to and from the main highways, with autonomous driving on the highways themselves. In any event the estimates here are that the maximum effect of autonomous vehicles on the unemployment rate would be in the range of 0.06-0.13%--and this would happen about three decades in the future when the technology is much better-developed. But more broadly, the lesson from technologies of the past is that while new technology causes dislocation and shifts of jobs, the total number of jobs doesn't fall. The report notes:

"AVs have two simultaneous impacts: The first is that labor in some job categories will be automated to some extent and, therefore, the number of jobs in those categories will decrease. At the same time, AVs will improve productivity and create more demand for transportation and goods. This increased demand will create jobs in several categories:

In my mind, the primary social discussion around autonomous vehicles should be about what is needed to facilitate their arrival.