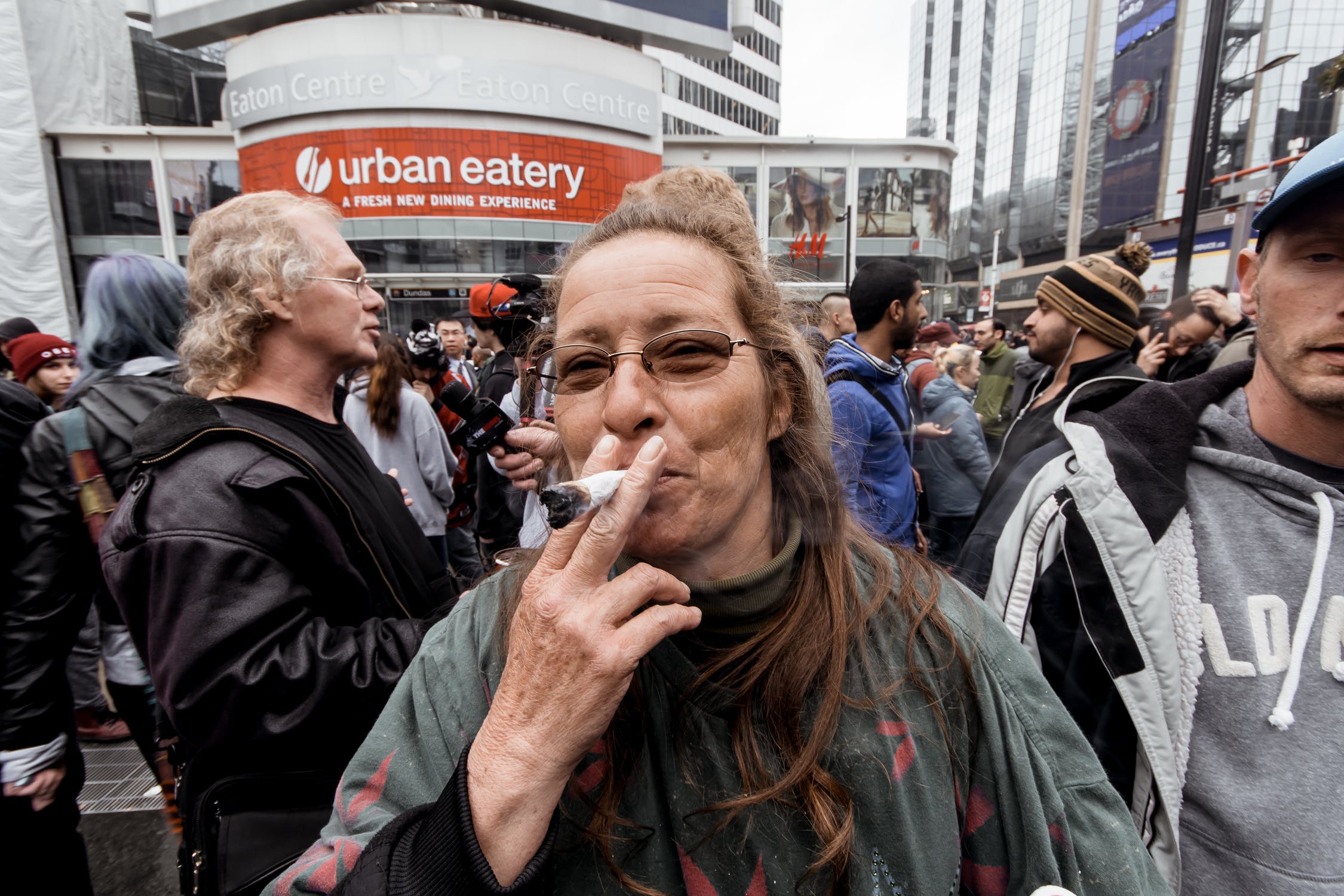 The current international standards for how a country should compute its GDP suggest that illegal activities should be included.

Just how to do this, given the obvious problems in collecting statistics on illegal activity, isn't clear. The US Bureau of Economic Analysis does not include estimates of illegal activities in GDP. However, there is ongoing research on the subject, described by Rachel Soloveichik in "Including Illegal Market Activity in the U.S. National Economic Accounts" (Survey of Current Business, February 2021).

It's perhaps worth noting up front that crime itself is not included in GDP. If someone steals from me, there is an involuntary and illegal redistribution, but GDP measures what is produced. Both public and private expenditures related to discouraging or punishing crime are already included in GDP. This is of course one of the many reasons why GDP should not be treated as a measure of social welfare: that is, social welfare would clearly be improved if crime was lower and money spent on discouraging and punishing crime could instead flow to something that provides positive pleasures and benefits.

Thus, adding illegal activities to GDP requires adding the actual production of goods and services which are illegal. Soloveichik focuses on "three categories of illegal activity: drugs, prostitution, and gambling." 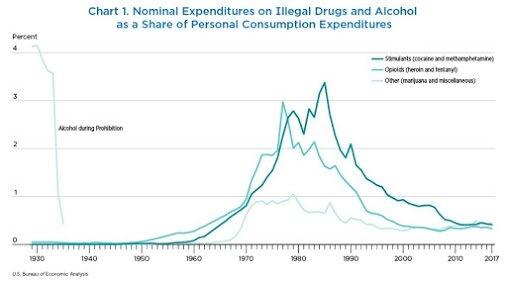 Chart 1 shows that the expenditure shares for all three broad categories of illegal drugs grew rapidly after 1965 and peaked around 1980. In total, this analysis calculates that illegal drugs accounted for more than 5 percent of total personal consumption expenditures in 1980. This high expenditure share is consistent with contemporaneous news articles and may explain why BEA chose to study the underground economy in the early 1980s (Carson 1984a, 1984b). Chart 1 also shows that illegal alcohol during Prohibition accounted for almost as large a share of consumer spending as illegal drugs in 1980 and changed faster. Measured nominal growth in 1934, the first year after Prohibition ended, is badly overestimated when illegal alcohol is excluded from consumer spending.

Here's a similar graph for total spending on illegal prostitution and gambling services. Spending on gambling was especially high up until about the 1960s, when first legal state lotteries and then casinos arrived. 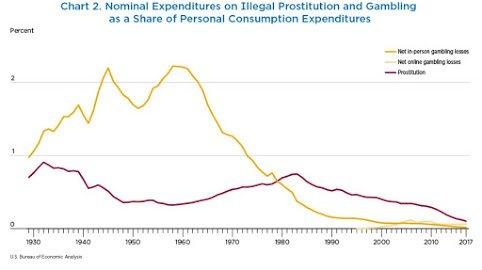 It may seem counterintuitive that the US can be suffering through an opioid epidemic in the last couple of decades, but still have what looks like relatively low spending on illegal drugs. But remember that the start of the opioid epidemic up to about 2010 largely involved legally sold prescription drugs --which would have been included in GDP. Total spending is a combination of quantity purchased and price. In addition, price must be adjusted for quality. Thus, what the data shows is that we are living in a time of cheap and powerful heroin and fentanyl. As Soloveichik writes:

With those patterns taken into account, here's a figure showing estimated drug prices over time, relative to the prices for legal consumption goods. Drug prices for opioids and stimulants fell sharply in the 1980s, which makes the rise in nominal expenditures on drugs shown above even more striking, and have more-or-less stayed at the lower level since then. 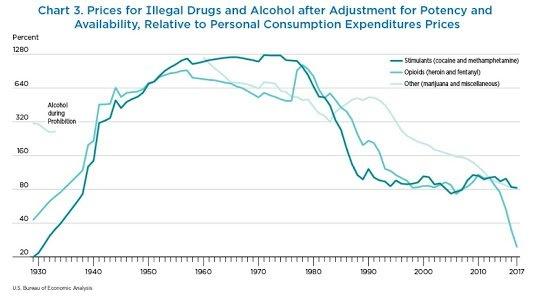 Soloveichik write: "Readers should also note that illegal drugs are a large enough spending category to influence aggregate inflation. Between 1980 and 1990, average personal consumption expenditures price growth falls by 0.7 percentage point per year when illegal activity is tracked in the NIPAs."

If you are interested in data sources for these illegal goods and services and what assumptions are needed to estimate prices and output levels, this article is good place to start.

View all
Powering an Inclusive Future for All
The Big Data Approach to the Big 5 Assessment
Enabling Your Data Driven Organisation - Part 2
Enabling Your Data Driven Organization
Action is the Foundational Key to All Success - But Knowing Which Action to Take is Half the Battle
How GDPR & Data Protection Act Affect the Marketing Industry
9 Best Ways for Businesses to Reduce Carbon Footprint
Sustainability: How Feasible Is It For Us to Stop Buying?
How IoT and AI are Protecting Wildlife From Poachers
Regenerative Development: The Next Step Beyond Sustainability
4 Challenges of The Carbon Credit System and How Blockchain Can Reduce Carbon Footprint
6 Sustainable Swaps for an Eco-Conscious Home
The Delta Variant & Bitcoin’s Looming Opportunity
How Can the Use of QR Codes Help Banks Simplify their Daily Transactions with Clients?
The Definitive Guide To Hedge Fund Software
Bond Boom Bolsters Bitcoin’s Bottom Line
A Guide On How To Choose The Right Loan For You
Understanding the Role of Artificial Intelligence in the SPAC Bubble
Can Administrative Health Care Reforms Get the Administrative Cost Advantages of Single Payer?
The Next Crisis Will Come from Cryptocurrencies
Has the Health Crisis Killed Music For Good?
Odebrecht: “The Largest Foreign Bribery Case in History”
Ransomware Attacks: No Longer a Matter of “If,” but “When”
The Potential of Geothermal Energy
How to Create Intelligent Governments with Artificial Intelligence
The Confidence of Americans in Institutions
Cuba: The Dictatorship And The “Blockade” Lie
The Role of AR, VR, AI and Robotics in Future Conflicts
Why Countries Need A National Artificial Intelligence Strategy
Learned Hand: “The Spirit of Liberty is the Spirit Which is Not Too Sure That It is Right”
Mathematics of Machine Learning: Data, Algorithm, Model, and Causal Learning
What is the Difference Between The Learning Curve of Machine Learning and Artificial Intelligence?
Can Artificial Intelligence Be Racist & Sexist Like Humans?
Meat: Less is More
Debunking The Discovery of all Discoveries
Why Healthcare Is Still Not Ready For Artificial Intelligence?
From Harry Potter to Miracle Workers, Daniel Radcliffe dishes on Fame
Caffeine and Other Impediments to Sleep
Why It's Time to Rethink Education and Change the Way We Teach and Learn?
Do You Show That You Care?
Why Make An Excuse For An Error That You Haven't Made?
Consistency is Key
How to End Ransomware
How Blockchain Can Be the Key for Smarter Welfare Distribution
Using AI in Application Performance Monitoring
IoT and 5G Convergence
Trends in Smart Home Technology
The Future of Job Training – Augmented Reality

How to End Ransomware
Powering an Inclusive Future for All
The Delta Variant & Bitcoin’s Looming Opportunity
How Blockchain Can Be the Key for Smarter Welfare Distribution
How Can the Use of QR Codes Help Banks Simplify their Daily Transactions with Clients?