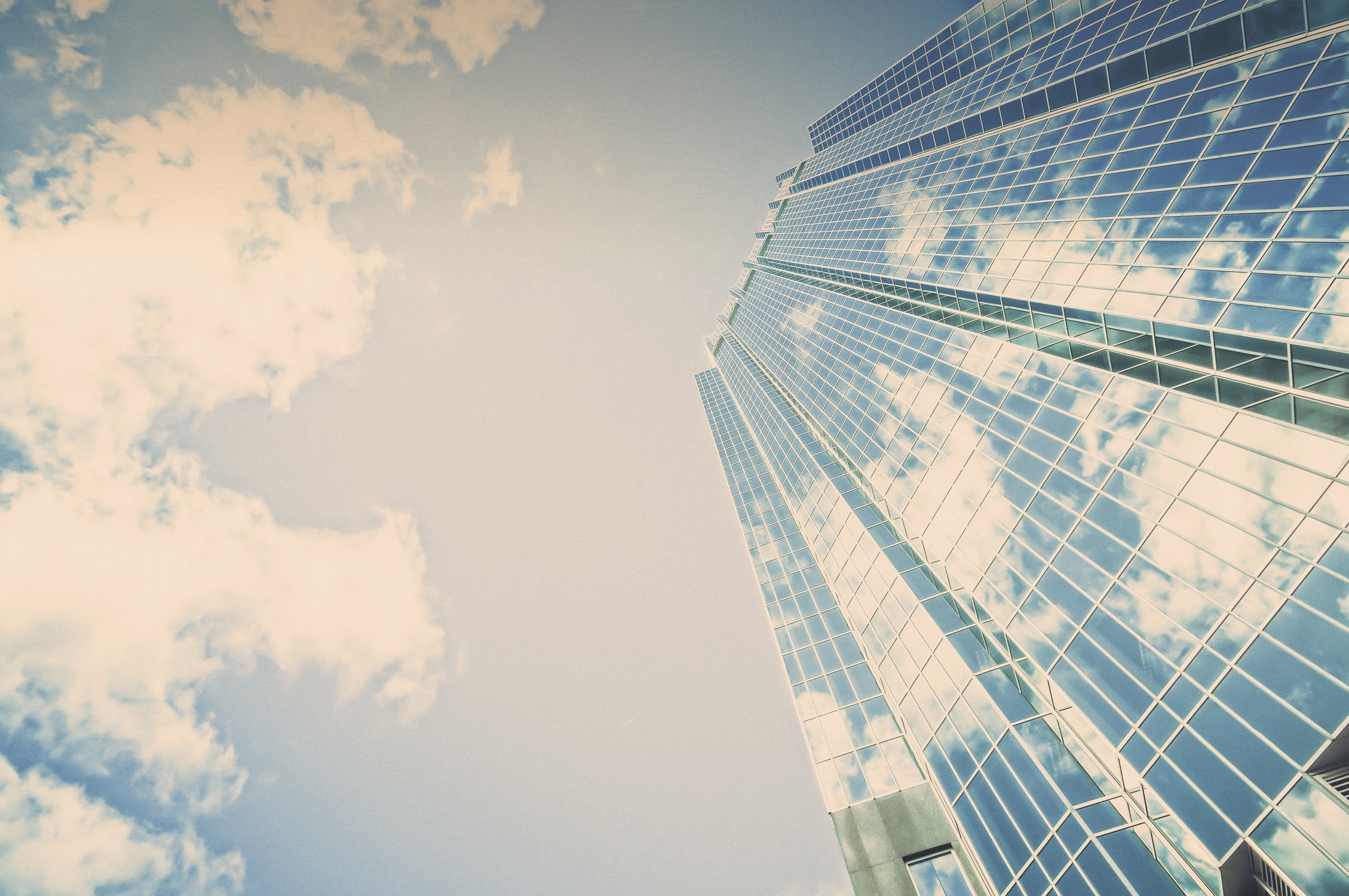 The overall growth of a country's GDP can be divided into five categories: growth of population, change in employment rate, change in hours worked, "capital deepening" (change in capital per worker), and growth of productivity (here measured by total factor productivity or GDP). Antonin Bergeaud, Gilbert Cette, and Rémy Lecat use this framework to review "Total Factor Productivity in Advanced Countries: A Long-termPerspective," in the Spring 2017 issue of International Productivity Monitor (vol. 32,  pp. 6-24).

This useful figure shows the breakdown of the five factors, looking across the United States, the euro area, the United Kingdom, and Japan. The perspective here is long-term, from 1890 to 2015, so we are talking about big changes in patterns, not about shorter-run effects of recession and recovery. 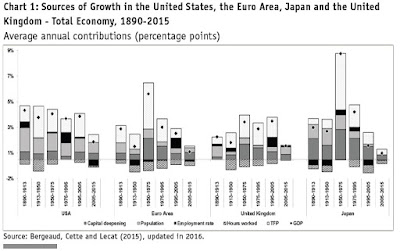 What are some of the patterns that become apparent in the figure?

Hours worked (shown by the part of the bars with diagonal stripes) has tended to be been flat or declining, so they tend to subtract from overall GDP growth--and in the figure, they go down into negative territory.

The employment rate is shown by the black portion of the bars. At various times in the past, a higher employment rate contributed to a rise in GDP: for example, in the US economy from 1975 to 1995 women are entering the (paid) labor force in substantial numbers. But in the most recent bars for the 2005-2015 interval, the employment rate is either negative or very small.

The bars have three other shaded areas, which from darker to lighter I'll refer to as gray, silver, and white. The gray portion of the bar shows "capital deepening," which is the rise in capital/worker. This is consistently a positive force in raising growth. It was especially powerful in the post-World War II years in Japan and the euro area. In recent years, with low investment rates, it has tended to make a smaller contribution.

The silver portion of the bar is population growth, which has become very small in the UK, euro area, and Japan, although it is comparatively larger in the United States.

Finally, the white portion of the bar is "total factor productivity," which is the growth in  productivity that remains after stripping out these other factors. It's useful to be clear on this point: productivity is not measured directly, but instead is calculated as what is left over after other forces are accounted for. In a classic line from the growth economist Moses Abramowitz, productivity growth is "the measure of our ignorance.

As the figure shows, productivity growth is also the largest part of what causes economic growth. Fluctuations in productivity are the biggest factor in rises and falls in overall economic growth. The authors try to look in more detail at factors like education and technology shocks. They write: Our main contribution is to show that including the quality of factors of production, especially education and technological shocks, significantly reduce the share of 20th century GDP growth that is unexplained. Nevertheless, still this share remains important, which suggests that there is scope for further analysis to better measure TFP [total factor productivity] growth."

They also note another productivity puzzle that has been discussed here a time or two. The reduced rate of productivity doesn't seem to be affecting the cutting-edge firms on the productivity frontier; instead, what's seems to be happening is that other firms are having a harder time keeping up with the productivity gains at the frontier. Or to put it another way, productivity gains are not diffusing through the rest of the economy in the same way that they used to. The authors write:

Regarding the productivity slowdown observed during the 2000s, analyses carried out by the OECD at the firm level suggest that this slowdown does not appear to be observed for the most productive firms, in other words, at the productivity frontier. The productivity slowdown appears to be a diffusion problem from the best performances at the frontier to the laggard firms. This diffusion problem seems to hinge on the nature of innovations at the current juncture, with intangible capital being more difficult to replicate, or on a winner-takes- all phenomenon in ICT [information and communications technology] sectors. The puzzle is why such innovation diffusion difficulties appear to have become worse simultaneously in all developed countries, which are at different stages of development. ...

Thus, the unsatisfactory measure of our ignorance is that productivity has slowed down, but we don't really know why. One hypothesis is that errors in measurement mean that current productivity growth and investment is underestimated, but this explanation is controversial. For an extended discussion, see the the symposium on "Are Measures of Economic Growth Biased?" in the Spring 2017 issue of the Journal of Economic Perspectives, with papers by Martin Feldstein ("Underestimating the Real Growth of GDP, Personal Income, and Productivity"), Chad Syverson ("Challenges to Mismeasurement Explanations for the US Productivity Slowdown"), and the team of Erica L. Groshen, Brian C. Moyer,Ana M. Aizcorbe, Ralph Bradley and David M. Friedman ("How Government Statistics Adjust for Potential Biases from Quality Change and New Goods in an Age of Digital Technologies: A View from the Trenches").

In the essay under discussion here, Bergeaud, Cette, and Lecat offer some possible hypotheses as well, which are intriguing if unproven. They write:

"One explanation being tested is that this weaker cleansing mechanism could at least partly be explained by a decline in real interest rates and less expensive capital, which allow low productivity firms to survive and highly productive firms to thrive. Less expensive capital lowers the return on capital expected from firms and allows innovative firms to take on more risks. But this could also contribute to capital misallocation, as financing becomes less selective on the main innovative projects. Recent researchers have found that such an explanation may be relevant for Southern European countries such as Portugal, Italy and Spain ..."

In other words, when interest rates are so very low, the pressures to lend mostly to those firms with really good economic prospects is diminished, and lower-productivity firms feel less pressure to upgrade. I'm not confident that this answer applies very well for the US economy, but then, I'm not sure what other answers to offer, either.