Economics of Mushroom Production: Kennett Square and the Rise of China

Economics of Mushroom Production: Kennett Square and the Rise of China 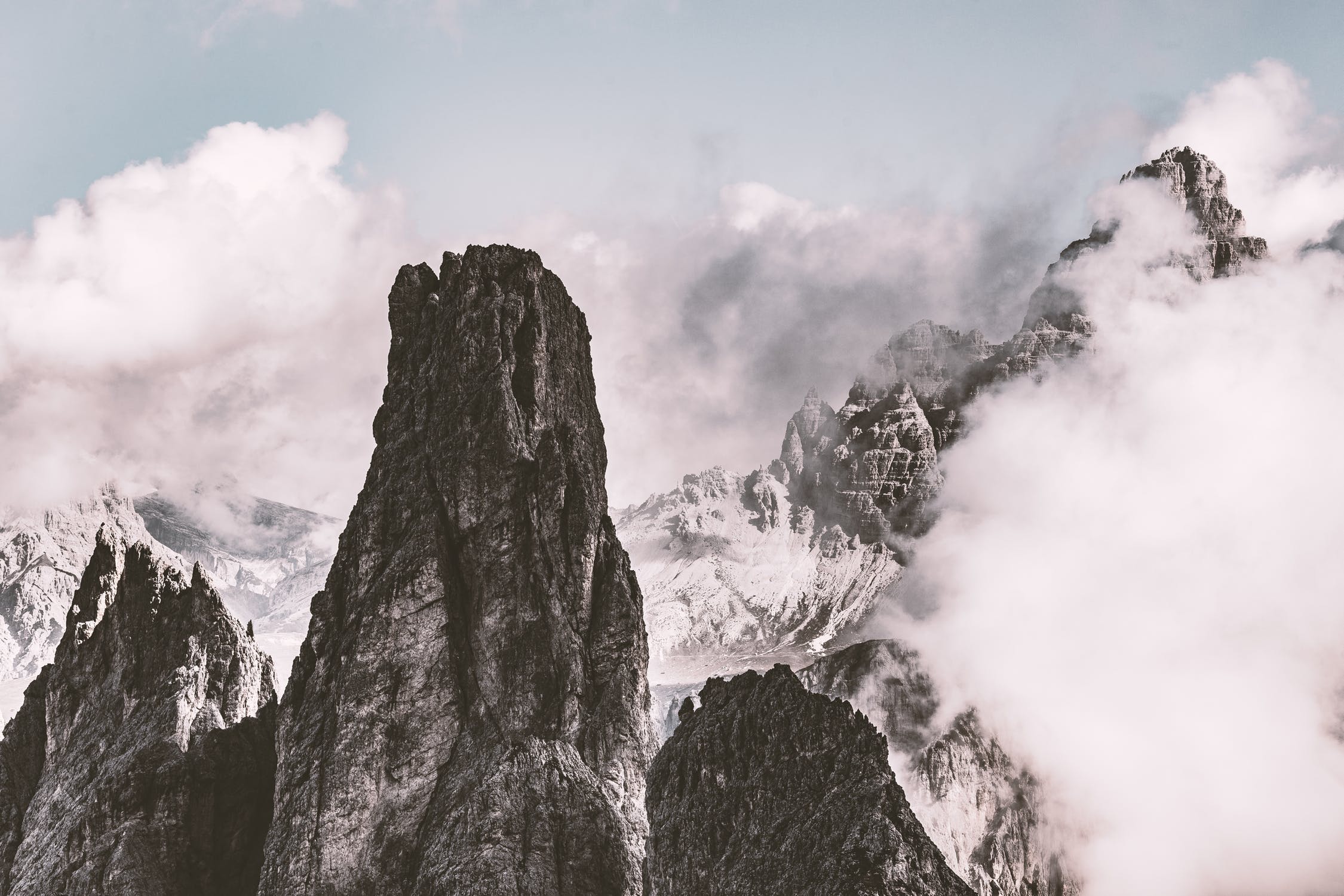 Mushrooms are a relatively small US agricultural crop, with total production of about $1.2 billion in the 2017-2018 growing year. But they do illustrate some economic lessons, including how a local area that develops a specialization in a certain product can be hard to dislodge, and how the rise of China is reshaping global production in so many ways.

The story here goes back to 1885, and to a florist named William Swayne who lived in Kennett Square. Swayne grew a lot of carnations, which required raised beds. He pondered whether it might be possible to grow a cash crop in the space under those raised beds. Mushrooms had been domesticated in France and England in the middle of the 19th century. Swayne sent away to England for mushroom spores, and began growing them. The demand was high enough that he built a "mushroom house," an enclosed building designed to grow only mushrooms. Other local farmers took note, and the Mushroom Capital of the World became established.

From an economic point of view, an obvious question is why mushroom production remains so concentrated in Chester County more than 120 years later. After all, the basic materials for growing mushrooms like compost from vegetative material (like straw and hay), along with animal manure, are not hard to find. The climate of southeastern Pennsylvania provides a usefully cool ground temperature in fall, winter, and spring, but there are many other locations with similar temperatures.

Although I do not know of a systematic study of mushroom technology, there are some obvious hypotheses as to why mushroom growing has stayed so geographically concentrated. Many types of production look fairly easy from the outside. But when it comes to large-scale commercial production that covers costs and makes a profit, it seems likely that growing mushrooms commercially requires detailed skill and knowledge that spreads among the workers and producers in a geographically close community--in much the same way that software developers flourish in the area around Silicon Valley. In addition to a local labor force with crop-specific skills, local producers build up a chain of processors, wholesalers, national distribution networks, and retailers that is not quickly duplicated. The producers around Kennett Square have shown an ability to dramatically increase production over time: for example, back in 1967 the total US production of mushrooms was 157 million pounds, with 57% coming from Pennsylvania mushroom farmers; in recent years, total US production of mushrooms has risen by a multiple of six at over 900 million pounds.  Finally, the relatively small size of the mushroom market can limit the incentives for new competitors to make substantial investments in trying to take over this market.

World production of cultivated, edible mushrooms has increased more than 30‐fold since 1978 (from about 1 billion kg in 1978 to 34 billion kg in 2013). This is an extraordinary accomplishment, considering the world’s population has increased only about 1.7‐fold during the same period (from about 4.2 billion in 1978 to about 7.1 billion in 2013). Thus, per capita consumption of mushrooms has increased at a relatively rapid rate, especially since 1997, and now exceeds 4.7 kg annually (vs 1 kg in 1997; Figure 2.2). ...

China is the main producer of cultivated, edible mushrooms (Figure 2.3). Over 30 billion kg  of mushrooms were produced in China in 2014, and this accounted for about 87% of total production. The rest of Asia produced about 1.3 billion kg, while the EU, the Americas, and other countries produced about 3.1 billion kg. 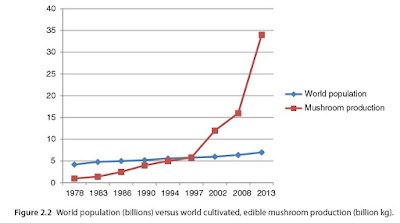 And here's a figure showing global mushroom production by location: 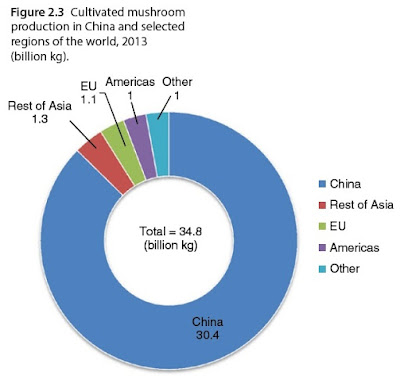 For sales of fresh mushrooms within the US and Canada, Kennett Square doesn't appear to be under immediate threat. But a 2010 report of the US International Trade Commission pointed out that the US became a net importer of processed mushrooms--typically grown in China--back in 2003-2004.