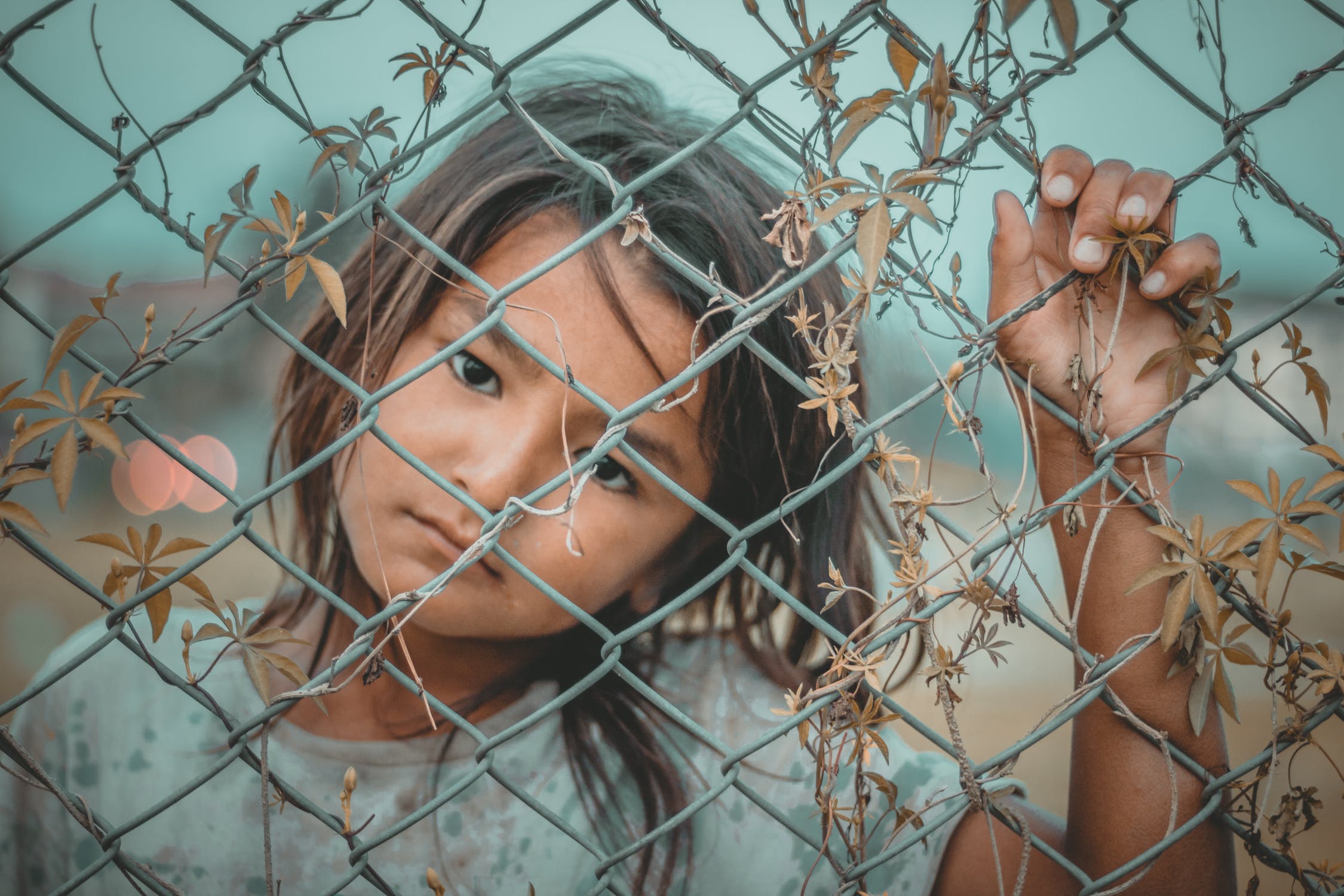 With immigration policy, a nation makes a decision about what number and kinds of immigration (family-based, skill-based) would benefit itself. But refugee policy, at least under the standard definition from the 1951 Refugee Convention, involves whether someone who, “owing to well-founded fear of being persecuted for reasons of race, religion, nationality, membership of a particular social group or political opinion, is outside the country of his nationality and is unable or, owing to such fear, is unwilling to avail himself of the protection of that country…”

In  theory, refugee policy is based on the need of the refugees themselves, not on some judgment about whether letting them in will benefit the receiving society. But the receiving society does retain the power to make decisions about the extent to which people have a "well-founded fear of being persecuted" in the sense of the term that would make them refugees, or whether they are trying to use refugee status to do an end-run about immigration limits.  Evaluating that distinction will often involve some degree of subjectivity and politics.

For an overview of what we know about the magnitudes, drivers, and legalities of refugee flows and assimilation, I recommend the two-paper symposium in the Winter 2020 issue of the Journal of Economic Perspectives. (Full disclosure: I work as Managing Editor of JEP.)

As Hatton notes: "The United Nations High Commissioner for Refugees (UNHCR) estimates the total number of refugees worldwide at the end of 2018 at 20.1 million. This is less than one-third of the total of 70.8 million `forcibly displaced persons,' which also includes those displaced within their home country (41.3 million) and Palestinians (5.5 million) who come under a separate mandate (UNHCR 2019, 2). In 2018, refugees were 7.6 percent of the stock of all international migrants (defined as those living outside their country of birth). ... As of 2018, two-thirds of refugees are from just five countries: Syria, Afghanistan, South Sudan, Myanmar, and Somalia. Of the total, 85 percent of refugees are located in developing countries, often just across the border from the origin country, and about 30 percent of these languish in organized refugee camps."

Here's a figure from Hatton showing the number of asylum claims by refugees over time. The figure makes obvious why concerns over refugee policy have been high in the European Union, and also in the US.  About one-third of asylum applicants are granted refugee status. 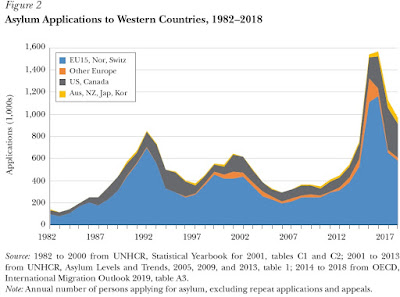 As one might expect, the drivers of refugee patterns are less about economic differences, and more about political terror in sending countries and proximity and access to another country. Hatton writes:

Several studies have assessed the push and pull forces behind asylum applications to industrialized countries by analyzing panel data on the number of applicants by origin, by destination, and over time. The most important origin-country variables are political terror and lack of civil liberties; civil war matters less, perhaps because war per se does not necessarily confer refugee status (Hatton 2009, 2017a). There is weaker evidence that declines in origin-country income per capita leads to more asylum applications, which offers modest support to the view that economic migration is part of the story. Proximity and access are important in determining the volume of asylum applications. Countries that are small but nearby can generate large flows—as with a quarter of a million Cubans moving to the United States in the 1970s and 400,000 Serbians and Montenegrins moving to the European Union in 1995−2004—provided that the door is left ajar. But the growth of transit routes and migrant networks have fueled the upward trend of applications from more distant origins. For example, travel in caravans through Mexico combined with violence and drought at home, a growing diaspora, and mixed messages about future US policy all combined to boost migration from Central America (Capps et al. 2019).

Brell, Dustmann and Preston present evidence on assimilation of refugees--which is often rather different from the pattern of assimilation by immigrants. For example, one striking pattern is that refugees are often slower to find employment than immigrants. In Germany, about 10% of refugees have found employment two years after arriving, while about 60% of immigrants have found employment within two years. This shouldn't be a surprise: remember, immigrants come because they are seeking something, while refugees are escaping something. The gap between employment of refugees and immigrants does tend to close over time. The outlier here is the United States, where employment rats for refugees and immigrants are much the same, right from the start. As the authors write: "It is not entirely clear why the US experience appears so different ... possible explanations could relate to the nature of the US labor market or to the nature of the settlement process in the United States, but require further investigation."

What helps refugees to assimilate faster? Brell, Dustmann and Preston offer some non-obvious insights. One is that many refugees have experience substantial trauma, and their fear of being persecuted is based on recent experience. Thus, there is some evidence that paying attention to their mental and physical health needs soon after arriving can help assimilation start on a better path. Speeding up the asylum process itself, so that people do not languish for several years without being able to start their new adjustment, can help. Another issue is that politicians sometimes divide up refugees among many locations. However, social networks within a group can offer an important method of learning about jobs and opportunities and more generally how to function in a new society, so relocating refugees from a certain place so that they are in decent-sized groups can  help assimilation.

One interesting US pattern involves acquisition of language skills: "[R]efugees arrive with lower levels of language proficiency than other migrants—at the time of migration, only about 44 percent of refugees speak English `well' or better, compared with 64 percent of other immigrants. However, while other immigrants do not tend to see particularly strong gains in English speaking skills over time, refugees rapidly improve and even overtake other migrants’ speaking abilities around ten years after arriving in the United States." One hypothesis is that immigrants may be living within an extended culture from their country of origin, and perhaps travelling back and forth now and then. But refugees are often more isolated, and they aren't going back, so their incentives to learn English are different.

(In the discreet shade of these parenthesis, I'll just note that at the end of this post it's annoying to me when public attention focuses so heavily on refugees who are seeking to enter the US and Europe, while largely ignoring refugees elsewhere or the group of displaced persons more broadly. At the peak a few years ago, the share of those making asylum claims in high-income countries was 1.5 million, a small share of the 70.8 million "forcibly displaced persons." Concern over the living conditions of the forcibly displaced population should not kick in only after they reach the border of a high-income country.)