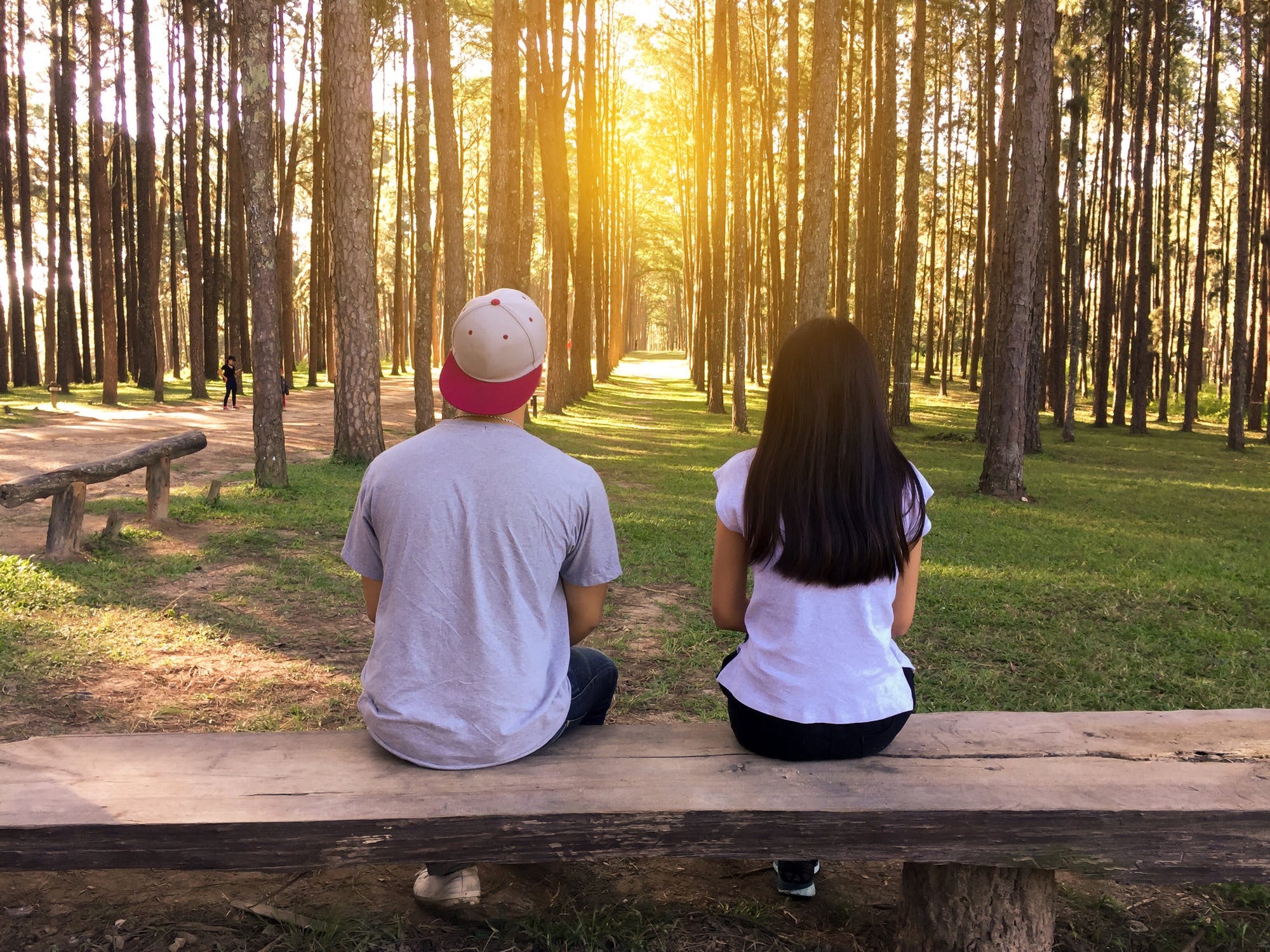 Online dating has already altered romance, and it may be on its way to altering society more broadly by changing the way that people from different groups make connections. Josué Ortega and Philipp Hergovich provide some evidence and analysis in "The Strength of Absent Ties: Social Integration via Online Dating". Here's some striking evidence that they cite from another paper on the rise of online romance, which explains why interracial match are trending.

The top graph shows heterosexual couples; the bottom graph shows same-sex couples. In each case, the red line that starts shooting up a few years before 2000 shows the share that "met online." Met in "bar/restaurant" has also rise, and one suspect that some of these meetings have an online component as well.Meanwhile, "met through friends," "met in church," and other categories have declined. 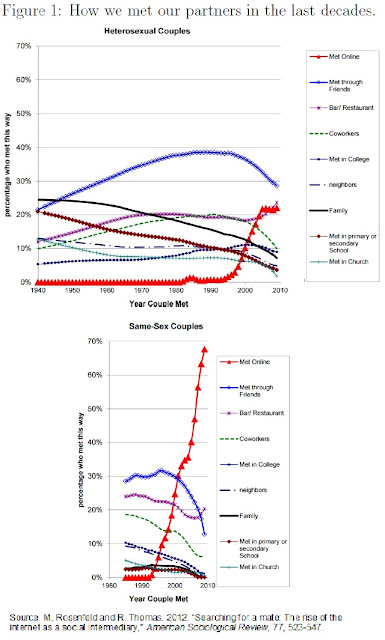 The Ortega and Hergovich working paper lays out a mathematical model of marriage matching that will be heavy going for most readers. But much of the intuition behind the model is fairly straightforward. Their focus is on the implications of online-dating for interracial marriage.

Here's a figure from their paper, showing the upward trend in interracial marriage (in this data, marriage of newlyweds) over time. As it explains under the diagram, "The red, green, and purple lines represent the creation of Match.com, OKCupid, and Tinder, three of the largest dating websites." They argue that it is not a coincidence that the rate of interracial marriage rises faster than it's long-term trend as dating websites arrive. 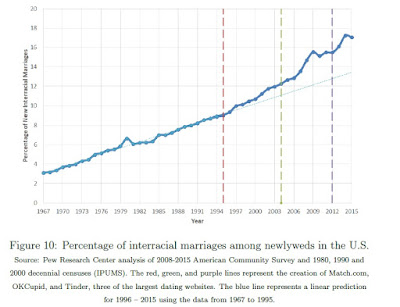 A standard model of marriage markets works like this. Those on one side of the market propose marriage to those on the other side. Those who like a proposal they receive can retain their preferred proposal--without actually accepting that proposal. However, all of those who are turned down go make another proposal. Again, those who like the proposal they receive can retain it, without saying "yes," and the cycle continues until no one wants to make any additional proposals. At that point, all those who have retained a desired proposal say "yes." This is an application of the famous Gale-Shapley algorithm, which was part of justification behind the 2012 Nobel price in economics. In the Ortega and Hergovich, people belong to certain communities, and at first you can only marry someone from within your community. Like the survey results above suggest, you are introduced by friends or an organization like your church. But online dating changes these dynamics. People can reach outside their usual community more easily, and a faster rate of increase in interracial marriage is one of the dynamics.

For a longer-term review of patterns related to interracial marriage, a useful starting point is Roland G. Fryer Jr., "Guess Who’s Been Coming to Dinner?Trends in Interracial Marriage over the20th Century," in the Spring 2007 issue of the Journal of Economic Perspectives.

My suspicion is that online dating affects marriage patterns in other ways, too. People have become more likely to marry others with similar educational and socioeconomic background.