The midterm elections in the United States have produced a result that was very similar to what the surveys estimated. The so-called “blue wave”, an expected overwhelming victory of the Democratic Party predicted by some, did not happen. The Democratic Party won 26 seats in Congress, and the Republicans held the Senate, increasing their majority by two representatives. Therefore, these are better Republican results than expected.

In the last 21 mid-term elections, the president’s party lost an average of 30 congressmen and 4 senators.

From the point of view of economic implications, the loss of Congress means that President Trump will have more challenges to pass many of the promised new reforms, especially the new tax cuts and the repeal of the Affordable Care Act. It also jeopardizes the implementation of the infrastructure plan.

The reason stock market futures have reacted positively is because the results were alrady discounted and the relative strength of the Trump administration remains.

President Trump controls the Government, the Senate, and the Supreme Court and can avoid the veto of Congress via executive orders, as Obama did. However, it is not so simple, and history shows that in the years following the loss of a majority in Congress, the president signs less legislative bills. In the case of Obama, it meant a reduction of 20%. 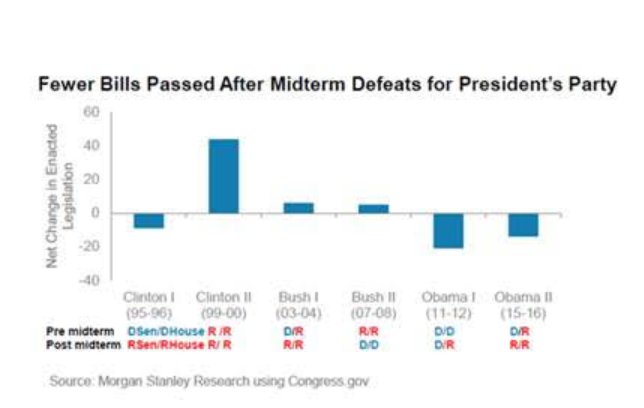 From the point of view of the US dollar, it tends to strengthen in the medium term after an initial fall and the stock markets rise.

If we analyze the risk indicators, the Vix fell 13% after the election result, and the ten-year bond from the United States received important inflows, with the yield at 3.22%.

The dollar (DXY Index) fell very little, showing, again, that the results do not have a huge impact. 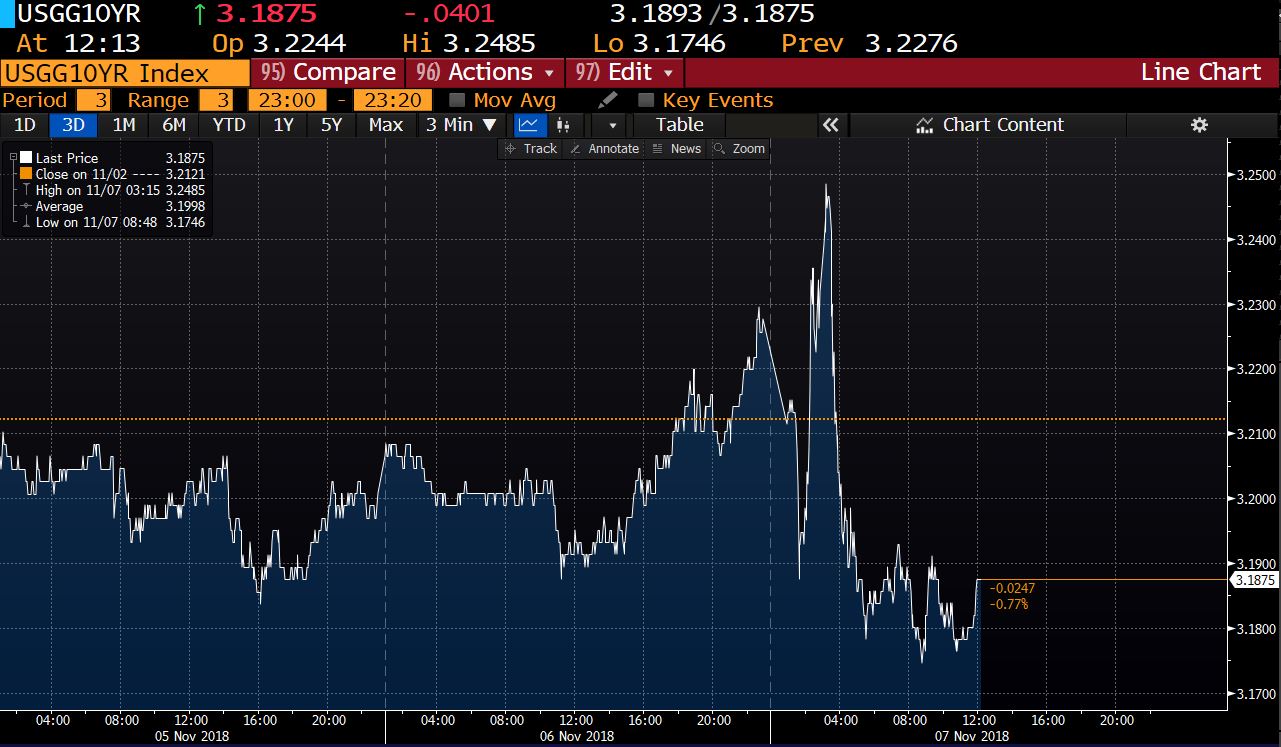 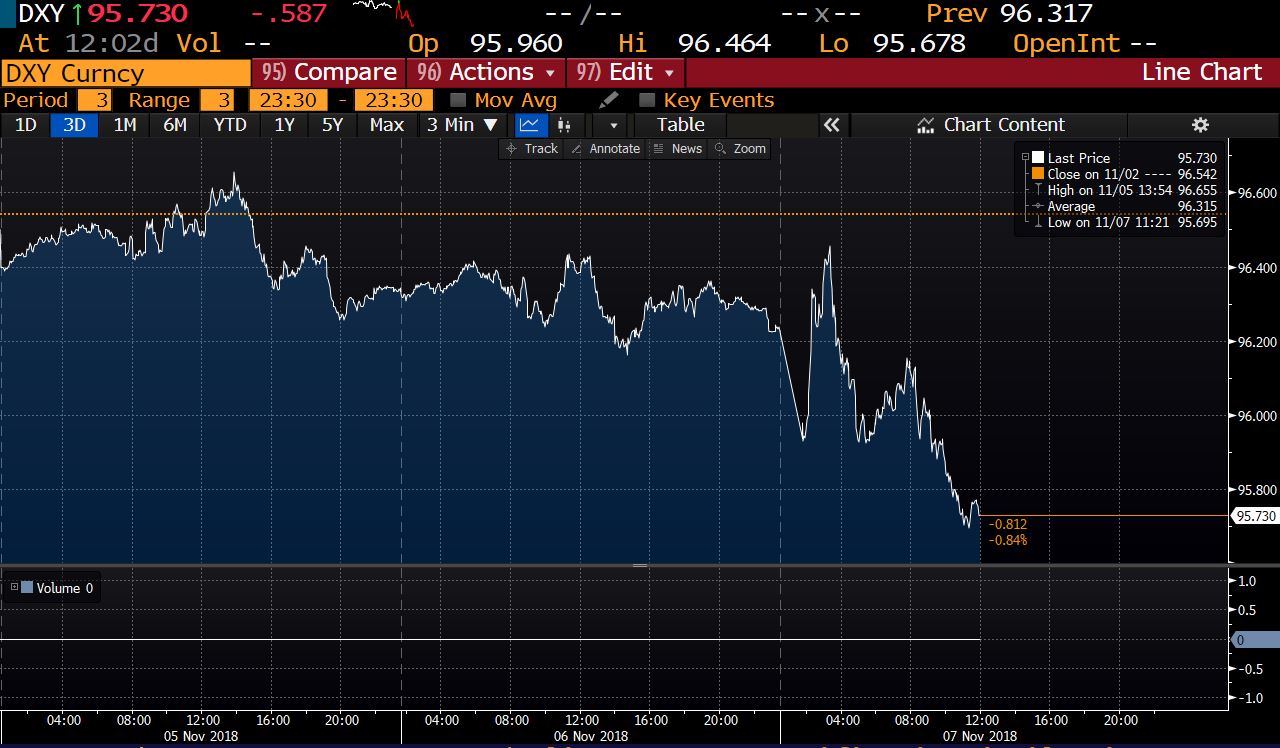 In terms of fiscal and monetary policy, what these elections show is that the path of rate hikes by the Federal Reserve will most likely continue and that the fiscal policy already implemented will be maintained.

Economic growth, employment and wages have been important factors in giving better results to the Republicans than expected, but the likelihood of an economic slowdown has not disappeared .

The US economy continues to show positive factors as well as concerning ones. Solid growth data and a healthy medium-term outlook, as well as a 10-year bond at 3.2% acting as a focus of capital attraction.

Economic growth is better than estimated. GDP grew 3.5% during the third quarter, after 4.2% in the second quarter of this year. We are at the height of the impact of the tax reform of Donald Trump and the prospects in the short and medium term are positive because, as we have always commented, more than 150 million Americans have not seen the recovery from 2009 to 2016.

With unemployment at the lowest level of the last 40 years, but a rate of labor participation that remains at 62.9%, there is a lot of room to continue improving .

Wages are rising, but barely in line with inflation, so there is also room there to improve.

We cannot talk of “overheating” in an economy with 62.9% labor participation rate, 78% industrial capacity utilization and wages rising moderately.

Consumer confidence is at record-highs and unemployment at historic lows, but there is more than ample room to improve to allow the recovery to reach the majority of the US population.

There are various concerns to address:

Rising public spending has generated a massive deficit increase despite tax revenues being above budget.

High levels of corporate and household debt built in the years of massive liquidity have not been a threat to the economy yet, but if the Federal Reserve does not raise rates as planned, higher levels of debt can cause a recession.

Other challenges include the presentation of a new budget, the risk of another “debt ceiling” crisis in 2019, the negotiations with China and the implementation of the agenda of public health and administration reform.

With a deficit that will exceed one trillion dollars despite tax revenues being above budget by almost 779 billion, it is clear that the United States should address the uncontrolled increase in spending that continues to be a burden on growth and a risk to public finances.

The deficit will not be solved by raising taxes, as we have seen in the past. After $1.5 trillion in new taxes, the Obama administration ended its tenure with almost $10 trillion in new debt.

The cost of interest payments alone is on its way to reaching $400 billion while entitlements and government spending are rising above real GDP almost every year.

This after almost $5 trillion of monetization from the Federal Reserve.

No. Debt will not be reduced with more quantitative easing or more spending. It simply has never worked. Both policies incentivize higher debt and more taxes. 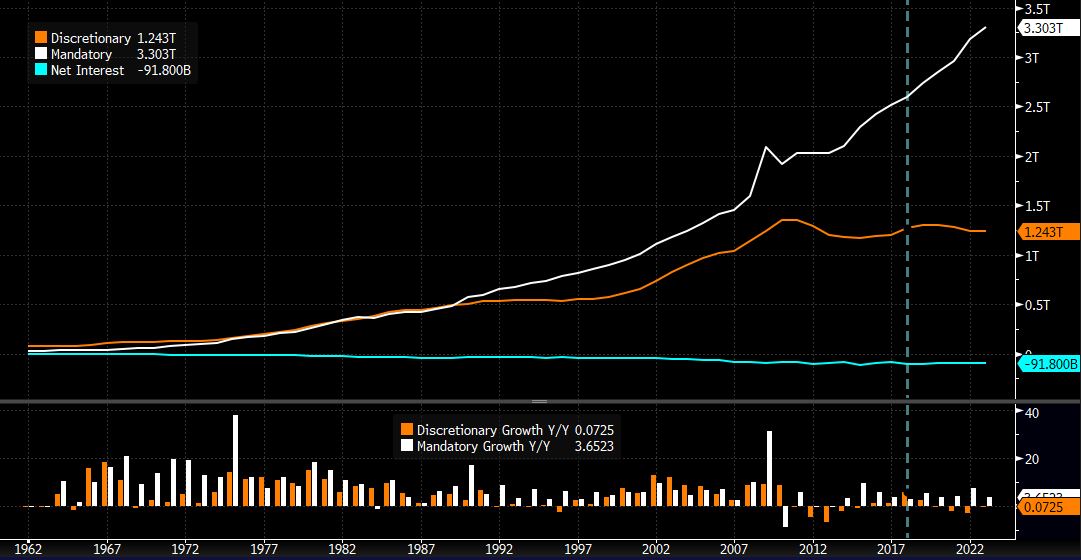 It is simple mathematics. The US will not reduce debt raising taxes, and structural deficits rise as the percentage of mandatory expenses over the total budget exceeds 60%.

There is no scenario in which it is mildly credible to see tax revenues outstripping spending in the near future. And this can lead to a debt crisis.

Furthermore, all the proposals of the Democratic party are aimed at increasing public spending even more. It is impossible to reach a figure of tax revenues that cover the existing or planned increases in government outlays.

The only way to cut debt is to cut spending. If the US does not address rising public spending and debt increase now that the economy is growing and the country is attracting capital, it will find itself in a debt crisis earlier than we fear. Can it be done? Government spending can and should be cut by at least $500 billion. 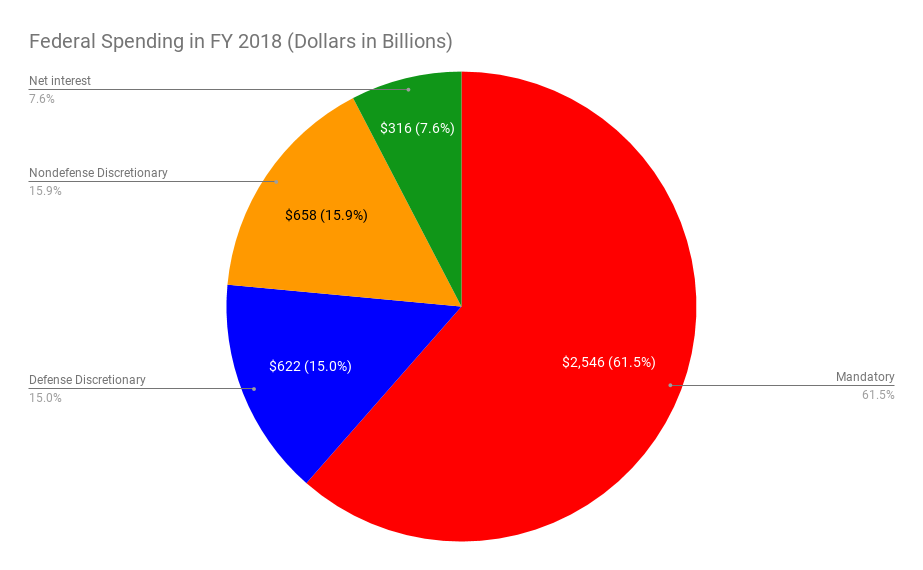 More debt and higher deficits are not growth tools. They are burdens on future growth, a liability on the nation’s future generations and the recipe for stagnation.

Monetization is not the answer. The purchasing power of salaries and savings disappear, hurting more citizens than helping. The US dollar risks losing its role as global reserve currency if governments continue to believe that they spend too little and citizens earn too much.

The US dollar is the world reserve currency because of its strengths. Copying the mistakes of the European Union only leads to its unemployment, its lack of growth and losing world reserve status.

Addressing public spending is much more difficult now that Congress is in the hands of the Democratic Party. As we saw last year, the only real agreement between the two parties since the arrival of the Trump administration was a massive increase in public expenditure.

Markets are showing a relief rally as we leave behind another political catalyst, but volumes are poor and valuations remain elevated while earnings estimates are coming down. Complacency remains very high and the combination of a 3.2% 10-year yield, rising rates and global slowdown need to be taken into account, as well as the risk of rising government spending.