Helping Big Pharma and the Matter of Black Lives

Helping Big Pharma and the Matter of Black Lives 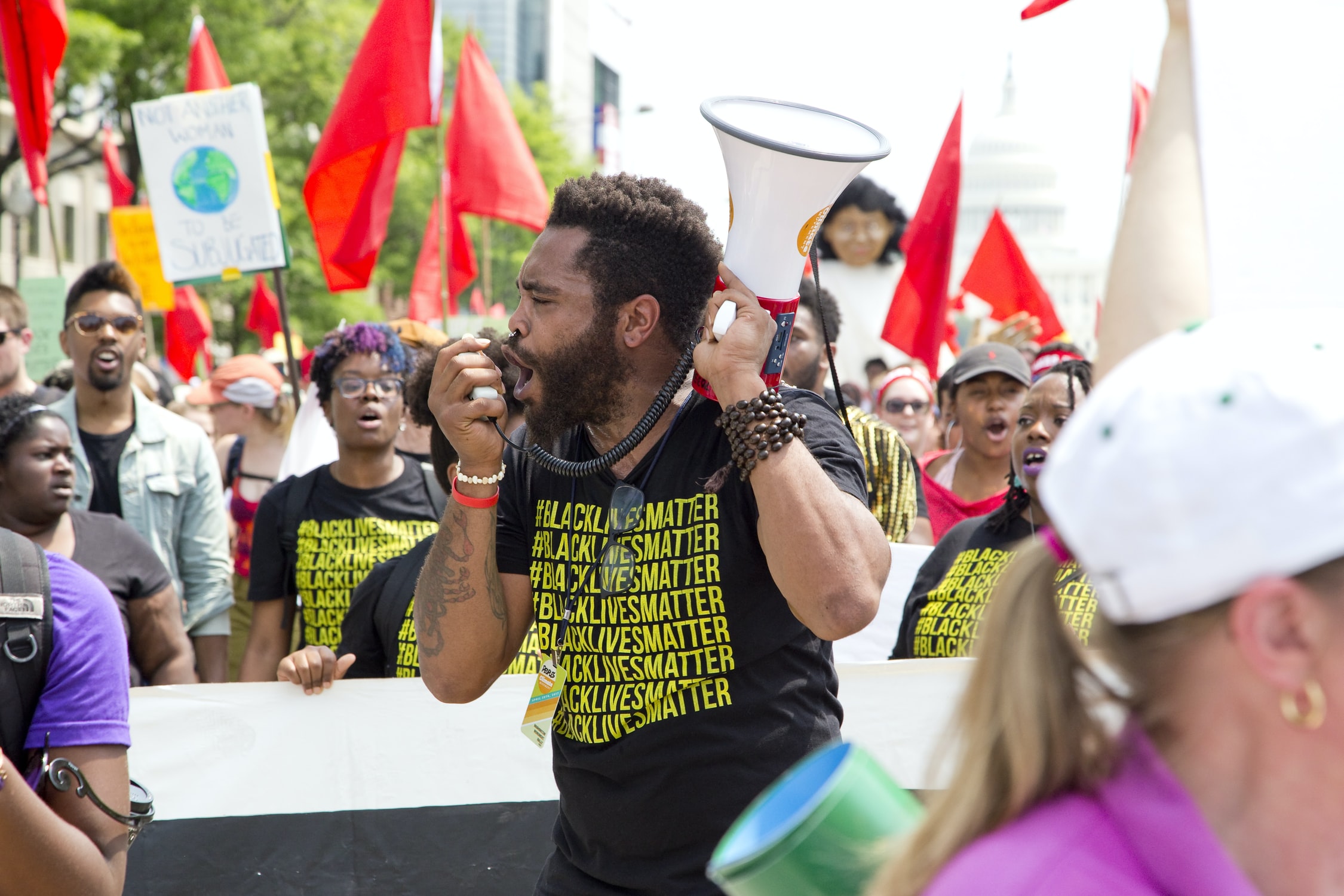 His doctor or nurse practitioner naturally sent him on to an oncologist.

That physician, in turn, directed a treatment plan that has drifted down like a designer shirt on the runways of Paris, eventually showing up in one form or another on the closeout rack at Walmart. It just becomes a protocol at this point, with him being the arrow that points right or left on some treatment flow chart. He flips through the hangers, but he has no energy now. Always late to the game. A shirt perhaps that is falling out of style, never a trend-setter.

He’s dying, he knows it. Maybe it’s prostate cancer or pancreatic or perhaps multiple myeloma. It has spread to his spine and he has been enduring the pain and decline for months as his eyes hollow and hair thins, as his muscle wastes and hope fades, and the face in the mirror reflects someone he once knew. Someone who once had plans, someone who once pushed a broom through the halls of a school, or moved boxes from point A to B, or hit nails into shingles to support a family that is all grown now.

People like him, people his color, of his station in life, don’t seek second opinions at Sloan Kettering or MD Anderson or Hopkins or Duke. They are doing well to buy a bus pass to get milk, let alone a ticket or the know-how to search the net to find the finest medical centers in the world, a chance to see the most renowned physician, or receive the most advanced surgery or therapy there is.

Two months of drug X, followed by a week of drug Y . . . then check the blood counts, repeat the CT scan, etc. That’s what they will be assigned to . . . an arrow, a right turn, another arrow, and on and on.

People who look like him are not part of that journey to discovery or that road to hope that may lead to a few more years by way of a novel therapeutic or one that shows promise.

Being a physician with unimaginable access to medical knowledge and resources, I understand THIS privilege. THIS is tangible to me. As a white male, I simply have never breathed the toxic vapors of racism. I’ve never choked on them—I doubt I ever will. My African American friends can tell me a thousand times how it's suffocating and burns their lungs and throat and I’ll listen, but they can’t make me feel it. But I understand the good fortune of access and I understand that there is a problem when the blatant specter of racial, health care inequality manifests itself when the guy pushing the broom can’t bathe in the therapeutic waters cascading off the walls of the ivory towers of medicine. The numbers simply don’t lie.

His company, par8o, was looking at how African Americans and other minority groups were horribly underrepresented in ground-breaking clinical trials of drugs and treatment modalities that are on the forefront of advancement in medical care. Trials that typically occur in the finest medical centers in the world.

I read through the paper . . . and the words struck me hard:

Ninlaro, which treats blood cancer multiple myeloma, was approved by the Food and Drug Administration (FDA) when clinical trial results demonstrated an average of 6 months without cancer spreading. Twenty percent of multiple myeloma patients are black, but only 1.8%—13 people of the 722 person Ninlaro trial—were African American.

In simple terms, 131 African Americans suffering from multiple myeloma missed out on taking part in a clinical trial that on average would have given them six months of possibly seeing the spread of their cancer stop. I guarantee many of these people died. These people missed holidays, and weddings, and births of grandchildren. They missed one more sunset, one more walk among friends.

Because they were black? Maybe. Because they were poor? Possibly. Because they had been blocked by a system that is as antiquated as a rotary phone? Absolutely. A time where patients in some of the most important clinical studies are literally still being recruited by advertisements hanging in the doctors’ urinals asking: “Do you have a patient that might be a candidate for a study we are doing on diabetes? . . . call 555 . . .” You think I’m kidding, but I’m not.

His paper goes on to cite example after example of tragic racial disparities in clinical trials:

Thirty-one cancer drugs have been approved since 2015. Twenty-four of the drug trials included fewer than 5% African Americans, despite blacks making up 13.4% of the US population.

So, I asked Dan, “Why is this, why are we seeing such a huge disparity in the representation of African Americans in cutting-edge clinical trials?” I knew this was important in light of the fact that often drugs—such as common medications like Albuterol and Plavix—have differential efficacy based on race or nationality. So, understanding how different racial and ethnic groups respond to therapies is vital to our understanding of a drug’s utility in clinical practice.

Unfortunately, the African American community has experienced a well-documented history of racial prejudice and a resulting mistrust of the system when it comes to clinical trials, most notable being “The Tuskegee Study” which literally allowed hundreds of African American men to develop horrible complications from advanced syphilis even though treatments were available in the late 1940s. Is it any wonder that recruitment can be difficult? But that is just a small part of the problem.

A major stumbling block to clinical study enrollment is that it requires an unrealistic amount of uncompensated work on the part of the referring clinician. It also requires the referring provider to be versed as to the myriad of clinical trials out there which change almost on a weekly basis. In layman’s terms, you are asking clinicians that barely can get Anthem or Medicare or Medicaid or United Health Care or any of a hundred payers to pay their bills for the provision of care provided to now sort through countless research studies and see if maybe one of their patients might fit inclusion criteria.This is not going to happen, especially if their trusted provider is working in an environment, such as a community healthcare center, where the population is poor, the physician is overworked, and the resources and infrastructure to facilitate enrollment is absent. Big Pharma has to bring innovation to their doctor and to their community—not their community to Big Pharma. Especially for the minority and the at-risk communities, we have to restore the trust in research and in clinical trials.

That trust, however, will not be found and nurtured under rotundas lined with polished marble and portraits of giants of the past—names that mean nothing to those who labor and toil. It will be found in sparse waiting rooms, and bench seats, on paper-covered exam tables, and rooms devoid of diplomas and “Top Doc” plaques. Where handouts on colon screening and coupons for discounted drugs sit next to jars of alcohol wipes and cotton balls. These are THEIR trusted places, their ivory towers of medicine, and they should be the hallowed and sacred grounds of Big Pharma too.

But for now, perhaps somewhere out there, unbeknownst to our dying man, is a drug, a therapy, a protocol that may just save him, give him a few months, a few years, or perhaps even a cure. Something that will help close the gap, if not for him, then for countless minorities who are not blessed with the “ease of access” that many of us enjoy.

This is a problem that needs to be solved—this is fixable.

Dan Palestrant may be on his way to solving it . . .

But for our man, our poor soul who breathes our same air and walks our same sidewalks . . . he may just have to surrender to the reality that at least he found a shirt.

Even if that style is years out of date.


Dr. Louis M. Profeta is an emergency physician practicing in Indianapolis and a member of the Indianapolis Forensic Services Board. He is a national award-winning writer, public speaker and one of LinkedIn's Top Voices and the author of the critically acclaimed book, The Patient in Room Nine Says He's God. Feedback at louermd@att.net is welcomed. For other publications and for speaking dates, go to louisprofeta.com. For college speaking inquiries, contact bookings@greekuniversity.org.