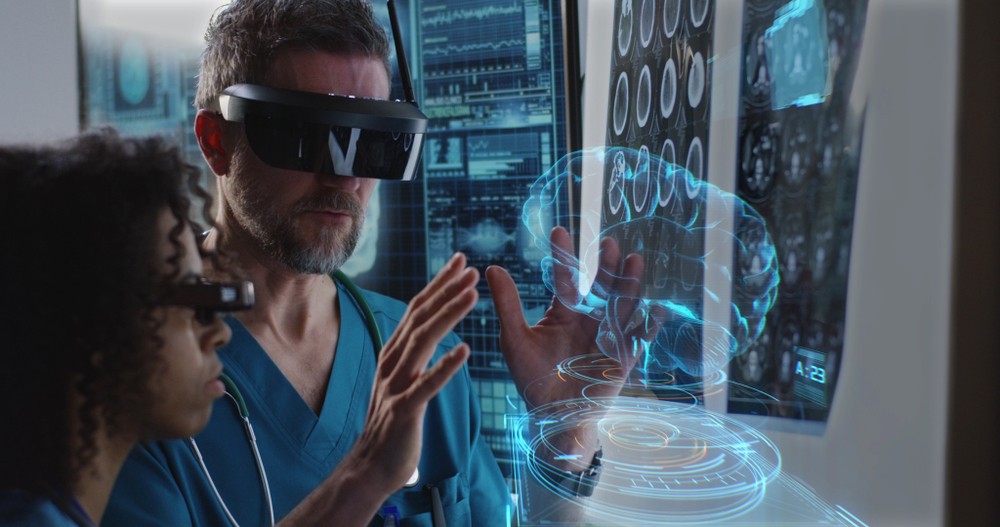 The use of virtual reality (VR) in healthcare is helping paralyzed patients carry out simple mobility tasks.

As you know, the brain is the command center of an individual's body. Brain-related issues can be the main cause of certain physical conditions suffered by individuals. For instance, the inability of brain signals to travel to certain parts of the body causes partial or total paralysis in patients. Modern technology can be leveraged to help patients overcome such conditions. VR has several applications in the field of psychology and can be useful for paralysis treatment too. VR helps shape modern healthcare. Its role in paralysis care will open even more doors for VR in healthcare. 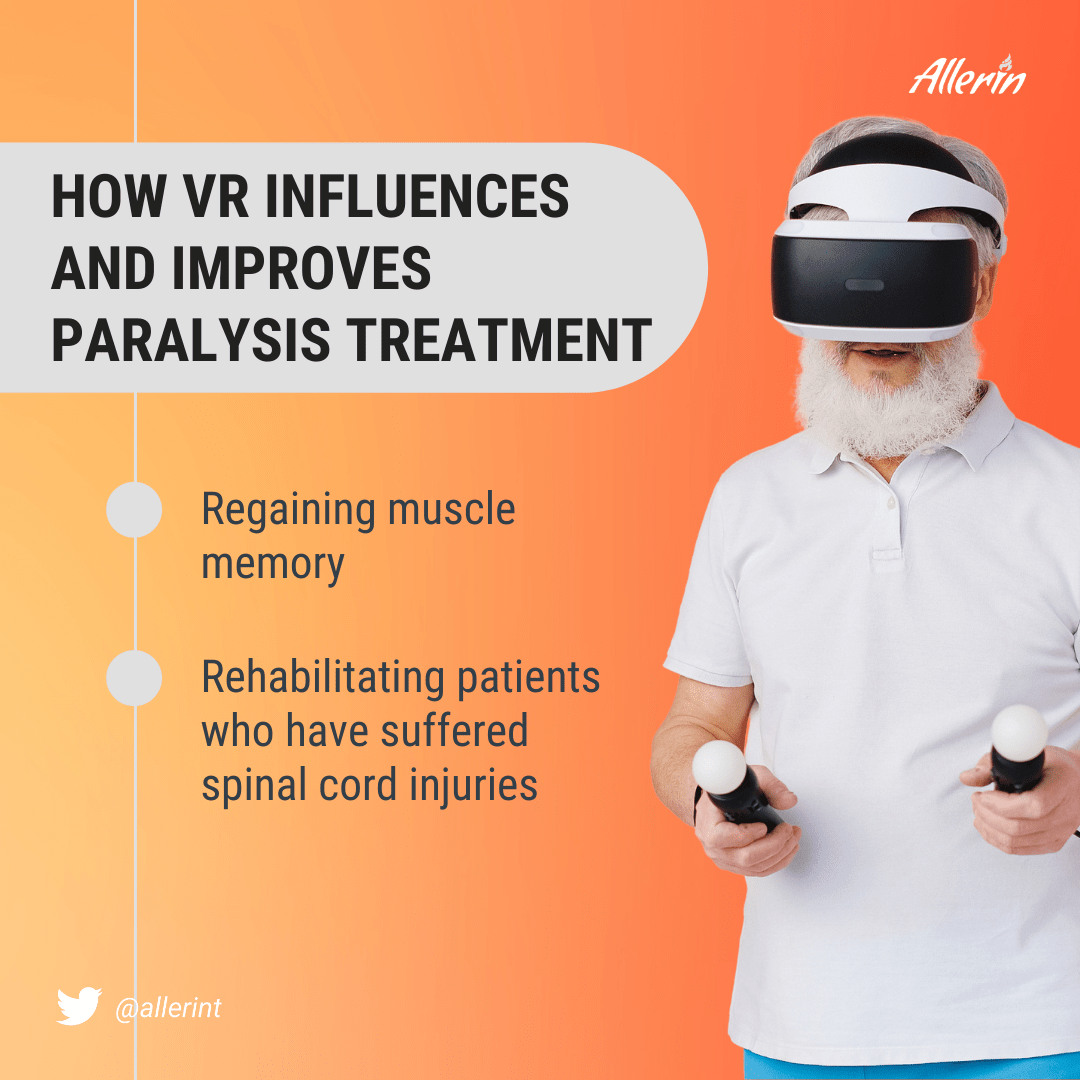 Specialized brain-machine interface applications, robotics and VR help patients regain muscle control and movement. Basically, in this procedure, patients are put through a training program that uses brain-controlled robotics and VR to help them imagine that they can move their muscles normally. After several aggressive training sessions like this, such patients can feel sensations in paralysis-ridden limbs and, eventually, regain muscle and movement control in them. One of the prime examples of this is a 32-year-old woman in Brazil. The woman, who was paralyzed from the waist down, regained partial muscle control in her feet after undergoing a VR-based treatment.

Paralysis has as much to do with the mind as it does with the body. So, if VR-based tools can allow paralyzed patients to virtually view themselves moving an immobile limb in a simulation, it can indirectly influence the brain to send impulses to those parts of the body in the real world. As a result, VR assists paralysis patients with regaining touch-based sensations in paralyzed body parts and also muscle and movement control.

Spinal cord injuries are one of the principal causes of partial or total paralysis in patients. Doctors can prepare rehabilitation programs for such patients. Such programs involve a series of VR-driven tasks or exercises that patients have to carry out. Such exercises can be carried out after surgeries are carried out to treat spinal cord wounds and disfigurement. Over a period of time, the doctors will measure specific aspects such as patients' motor functions, balance, aerobic processes, and pain to gradually enable them to break free from paralysis. The time taken for the success of such programs depends on how rapidly a patient is making progress.

The involvement of VR in healthcare will keep growing steadily in the future. While VR-based paralysis treatments can be considered niche, for now, you can fully expect them to become a part of mainstream paralysis care in the not-so-distant future.

View all
6 Reasons Why You Should Consider A Fish Tank For Your Office
7 Useful Small Business Marketing Tips
Need To Get Ready For That Job Interview Soon? Listen To These Tips
A Guide to Kick-Starting the Digital Transformation Journey of Your Business
The Elements of Scale: Capabilities You Need in your Test Automation framework and infrastructure
7 Interesting Careers Perfect For A Switch
Expert Tips To Create An Environmentally Conscious Workplace
Climate Emergency Innovations and Insights in Business
Why It’s Crucial To Fix Your Business Energy Prices Before 2023
Artificial Intelligence Is Transforming The Aviation Industry
How Has the Energy Crisis Impacted the Cleantech Job Market?
PADI Dives Into Global Conservation
Why Do You Need Car Insurance?
A Short Guide to Employee Group Life Insurance
Benefits of VR L&D Training for Higher ROI
How and Why to Refinance Your Mortgage
How To Renew Bajaj Allianz Bike Insurance? Important Steps To Know
How To Build a Recession Proof Business
When Surrounded By Exponential Growth, “Wait and See” Can Mean Missing An Opportunity
HR Digital Transformation and the Rise of AI in the Corporate World
Peltzman on Stigler on Regulation
Should the US Switch to a Declining Discount Rate?
Putting U.S. Labor Force Participation in Context
Keynesian Policies Have Left High Debt, Inflation and Weak Growth
The Safest and Most Dangerous Places to Work in the UK
Investment Charges When Mexico Privatized Social Security
Henry Adams on the Corruptions of Power
Former Pakistan Prime Minister Imran Khan Shot in Foot in Clear Assassination Attempt
Benjamin Netanyahu Set to Return as Israel's Prime Minister
Reflections on Sources of US Energy Consumed
How AR Glasses Can Tackle Visual Impairement
Main Reasons Why A Young Woman May Have Low Progesterone
How to Gain More Control Over Your Mental Health in Today's World
How Food Insecurity Is Driving an Increase in Adult Disordered Eating
6 Keys to Finding The Top Diet Pills Online
How Artificial Intelligence Augments Animal Healthcare
How Blockchain Can Tackle Homelessness
How To Reject Opportunity; Like Turning Down the Beatles
State Your Case and Win
7 Common Garage Problems and How To Solve Them
Are You Struggling With Alcoholism: Here Are 10 Things You Can Do To Make It Stop
Smart Ways to Upgrade Your House to Raise its Market Value
Reducing Cyber Underwriting Risk Starts with the 3 “Bs”
Productivity Hacks for Remote Workers
Essential Guide to Use Google Local Service Ads
9 Trends That Will Dominate Blockchain Technology In 2023
4 Ways Artificial Intelligence Has Revolutionized the Retail Sector
What Kind of Robot is Used in Manufacturing the Most Frequently?

6 Reasons Why You Should Consider A Fish Tank For Your Office
Reducing Cyber Underwriting Risk Starts with the 3 “Bs”
Why Do You Need Car Insurance?
How Blockchain Can Tackle Homelessness
Productivity Hacks for Remote Workers