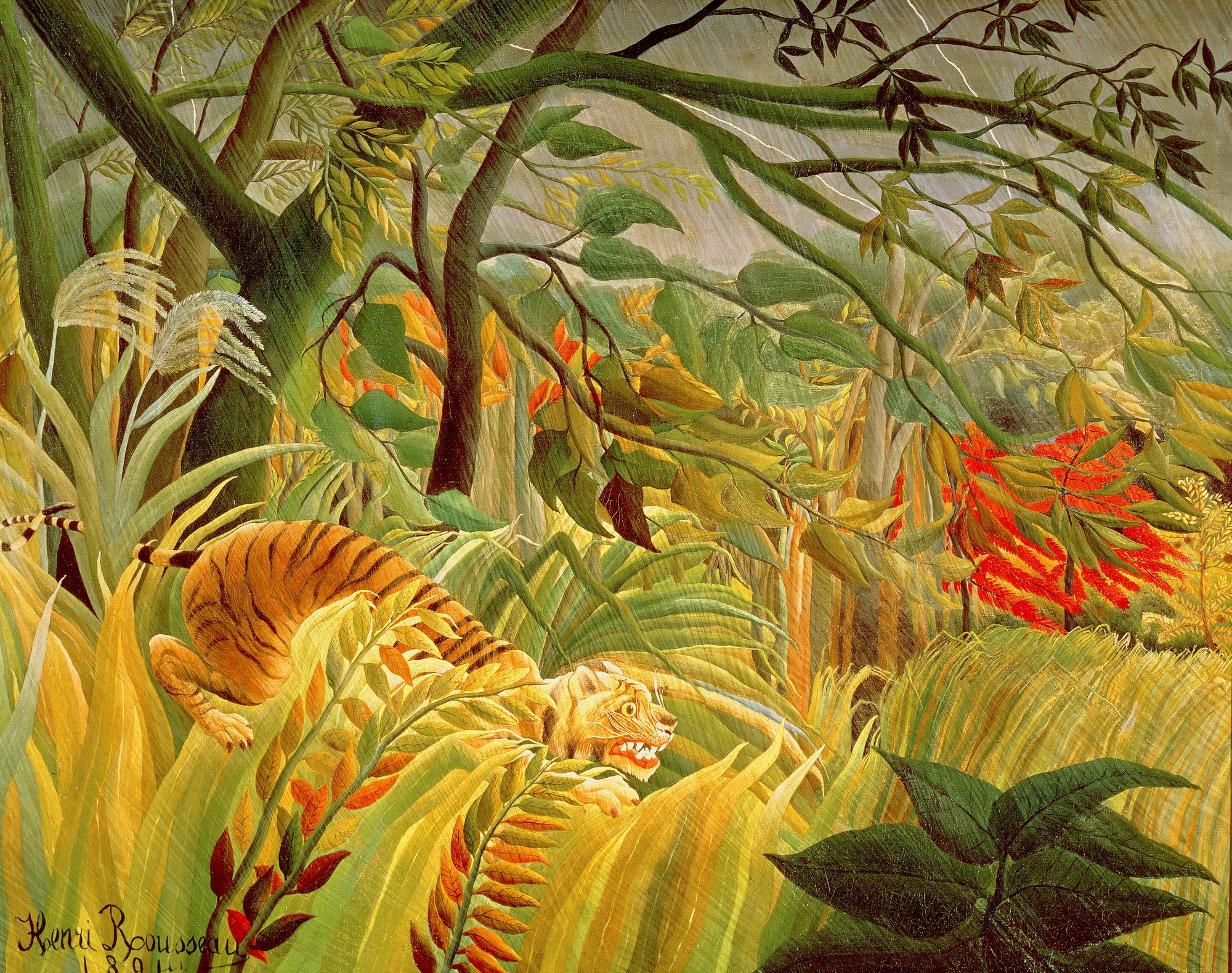 One of my favourite picture in the National Gallery is 'Tiger in a tropical storm' by Henri Rousseau. It shows a tiger stalking an unseen prey in a rain lashed jungle. It’s a wonderfully vibrant evocative image.

Later, as I went on to study Zoology, I began to look at the painting more closely and more critically. Have a look for yourself. On closer inspection the tiger doesn’t look that tigerish and the jungle doesn’t look like any jungle you would recognise. Something is odd and amiss about the image.

The explanation for this jarring can be found when you look at the background of the artist. Although nicknamed Le Douanier (the customs officer) Henri Rousseau never left his native France. He found inspiration for his painting by visiting the botanic gardens of Paris and by looking at books and taxidermy.

So Rousseau wasn’t painting from a memory of what jungles and tigers actually looked like. He was painting a version of what he thought they looked like. That explains the disconnect and the otherworldly look of his pictures.

Too often today we fall into the same trap as Rousseau. We convince ourselves that data and the internet can provide us with a clear picture of what is going on in the world. And to an extent, it can.

But by sitting behind a screen we miss key details and information. And as a result, we don’t fully understand and experience the lives of the people we are trying to connect with.

As we have seen from recent elections just looking at voting numbers doesn’t capture the force and strength of people’s emotions. Many commentators were optimistic about the UK remaining in the EU. But commentators like the Guardian’s John Harris who had toured Britain and spoke to people across the country were much less certain of the vote; they had seen the strength of people’s emotion behind their voting intentions.

So data can help create a broad brush picture of a situation but often a more personal approach is needed to fill in the detail and to add context. And that is often the difference between something that is nearly right and something which is absolutely right.

Spotify has managed to combine these two elements to create their weekly discover playlists. The problem with machine generated playlist is that one wrong song wrecks the experience and causes people to turn off. But people also like to listen to playlist to discover new music they haven’t heard before.

Spotify’s solution is that they use both their own recommendation algorithm but combine this with data from millions of playlists created by their own listeners. This balances both the human and the machine to produce playlists that are both surprising and familiar.

On a more prosaic level just understanding the language people use can have a huge impact on outcome. Consider this seemingly trivial question. What is the name of the piece of furniture several people can sit on to watch the television?

Why does that matter? It matters if you are designing a website or interface for a furniture retailer. You will need to ensure that products are tagged with multiple names and that search and navigation takes into consideration not only preferred language but also cultural nuances. For example, the impact of just showing (British) Chesterfields to Canadians would likely cost you a lot in missed revenue.

Also, just relying on data to both create and validate hypothesis can make you miss something that appears obvious with hindsight. Several years ago we were asked by a client to come up with a plan to market an upmarket pasta sauce to families.

Although it had a price premium and slightly more exotic flavours there didn’t seem to be any substantial reason that Families wouldn’t buy the product. It was only when we went on accompanied shops with people did we find the real barrier – the jars were too small.

Unlike other brands, our client’s products were only available in 350g jars. That was enough to feed 2 people but was really inconvenient to shop for and feed a family of 4. We had been using data to investigate the wrong barriers. It was only when we started to walk the aisle with the people that we found the real issue.

So if you are looking to connect with people don’t just look at the data and sit behind your screen. Get out, get your shoes dirty and get to see the real picture.