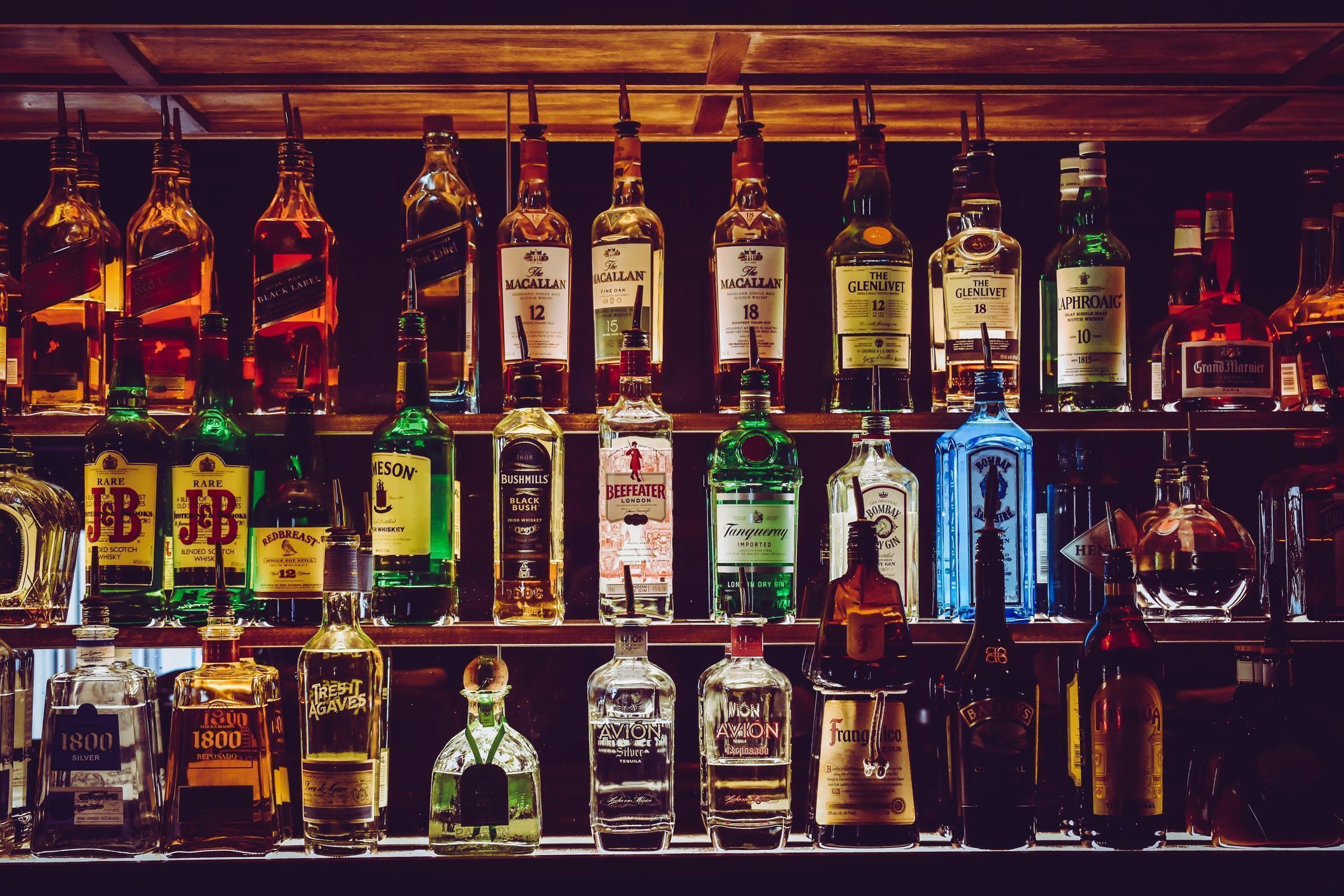 Markets for beer, wine and spirits offer can patterns of broad cultural interest--and for the college teacher, may serve to attract the attention of students as well. Kym Anderson, Giulia Meloni, and Johan Swinnen discuss "Global Alcohol Markets: Evolving Consumption Patterns, Regulations, and Industrial Organizations" in the most recent Annual Review of Resource Economics (vol. 10, pp. 105-132, not freely available online, but many readers will have access through a library subscription). The authors take a global perspective on the evolution of alcohol markets. Here are a few points of the many that caught my eye.

3) There is something of inverse-U relationship between quantity consumed of alcohol and per capita GDP of countries. 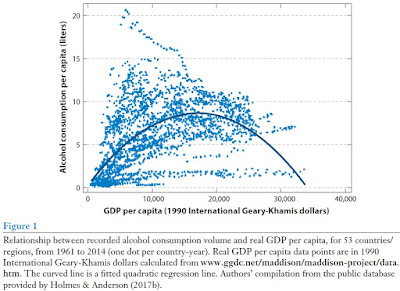 4) However, when it comes to spending on alcohol as a share of income, it does not seem to drop off as income rises. The implication is that those in countries with higher per capita GDP drink smaller quantities of alcohol, but pay more for it. 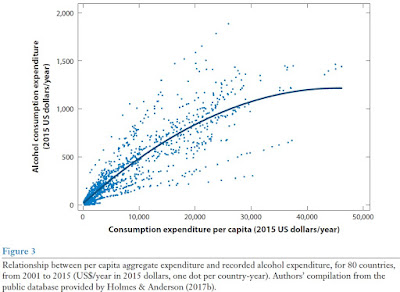 5) "In early history, wine and beer consumption was mostly positively perceived from health and food security perspectives. Both wine and beer were safe to drink in moderation because fermentation kills harmful bacteria. Where available at affordable prices, they were attractive substitutes for water in those settings in which people’s access to potable water had deteriorated. Beer was also a source of calories. For both reasons, beer was used to pay workers for their labor from Egyptian times to the Middle Ages. Wine too was part of some workers’ remuneration and was included in army rations of some countries right up to World War II. Moreover, spirits such as rum and brandy were a standard part of the diet for those in European navies from the fifteenth century."

The authors then discuss how the rise of hard spirits and income levels raised concerns about health effects of alcohol consumption, while nonalcoholic alternatives became safe to drink--factors that helped to reconfigure social attitudes about alcohol.

The article also includes discussions of the evolution of alcohol taxes, shifts in market concentration and competition, the rise of smaller-scale producers in recent years, and much more.

View all
What is Marketing Collateral and Why Should You Care?
Affiliate Marketing 101: How to Set Up a Profitable Partner Program
Hybrid Work: What We Lose in a Virtual Workplace
Why Should Every Digital Business Invest In An Explainer Video?
Transforming Digital Businesses With Innovation, Knowledgeable Workers, and Effective Management
In Search of Unknown Angels
Sustainable Fashion: Recycling Challenges in The Textile Industry
Is The Internet of Things Making Way For Smart Agriculture?
Clean Energy and Pro-Mining
Lithium for Car Batteries: A Demand Shock Example
Sustainability Reporting Is Not A Proxy For Progress
Nitrous Oxide, Agriculture, and Climate Change
Cashing Out a College Education: 5 Reasons You Should Pursue a Finance Major
Everything You Need to Know to Open and Access an Offshore Bank Account
Titanic Crash — How Algorithmic Stablecoins Fall Short Fast
Tether May be Backed by More than Just Dollars
How to Choose the Best Online Trading Platform
The Top Tax Questions For The Season
Some Economics of Black America
Commodities, Supply-Chains and Structural Changes in Demand
Interview: Amartya Sen on a Bicycle
From Pandemic to Digitalization to Productivity?
The G-7’s Reckless Commitment To Mounting Debt
The Social Nature of Government Actions
Political Economy of the Pandemic Response
Queen Elizabeth II Marks 95th Birthday in Private
Covid-19 and Fake News: Exponential Rise of Conspiracy Theories and How to Prevent Misinformation
UK Budget 2021: Corporate Tax Rise, VAT Cut for Hard Hit Sectors Extended & Income Tax Thresholds Frozen
What If George Washington Lied?
Judges and Ideology
Engineering a Symbiotic Artificial Superintelligence by 2025
The Role of Context in Data
When the Invention Becomes the Inventor: How AI is Making Inroads in Scientific Discovery and Innovation
The World of Reality, Causality and Real Artificial Intelligence: Exposing the Great Unknown Unknowns
Redefining Artificial Global Intelligence (AGI)
Making Sense of Data Features
What Are Topic Clusters and Why Use Them?
The Diversity Playbook with Hephzi Pemberton
Post Covid-19: How to Develop a Solid Business Continuity Plan
Science of Learning: Why We Should Embrace Mistakes in Education
Camera or no Camera? Should You Show Your Face?
Photographer/Videographer Jiayi Liang Inspired by Fashion Runways and Nat Geo’s Famous Photographers
All You Need To Know About LED Parking Lot Lights
The Dawn of Virtual Reality for Training
9 Tech Trends That Are Driving Online Retail
Tech Trends That Are Affecting Agriculture, Processing, Marketing & Distribution of the Food Industry
An Enlightened Future with Artificial Intelligence
Using VR and Augmented Reality to Aid Driver Training