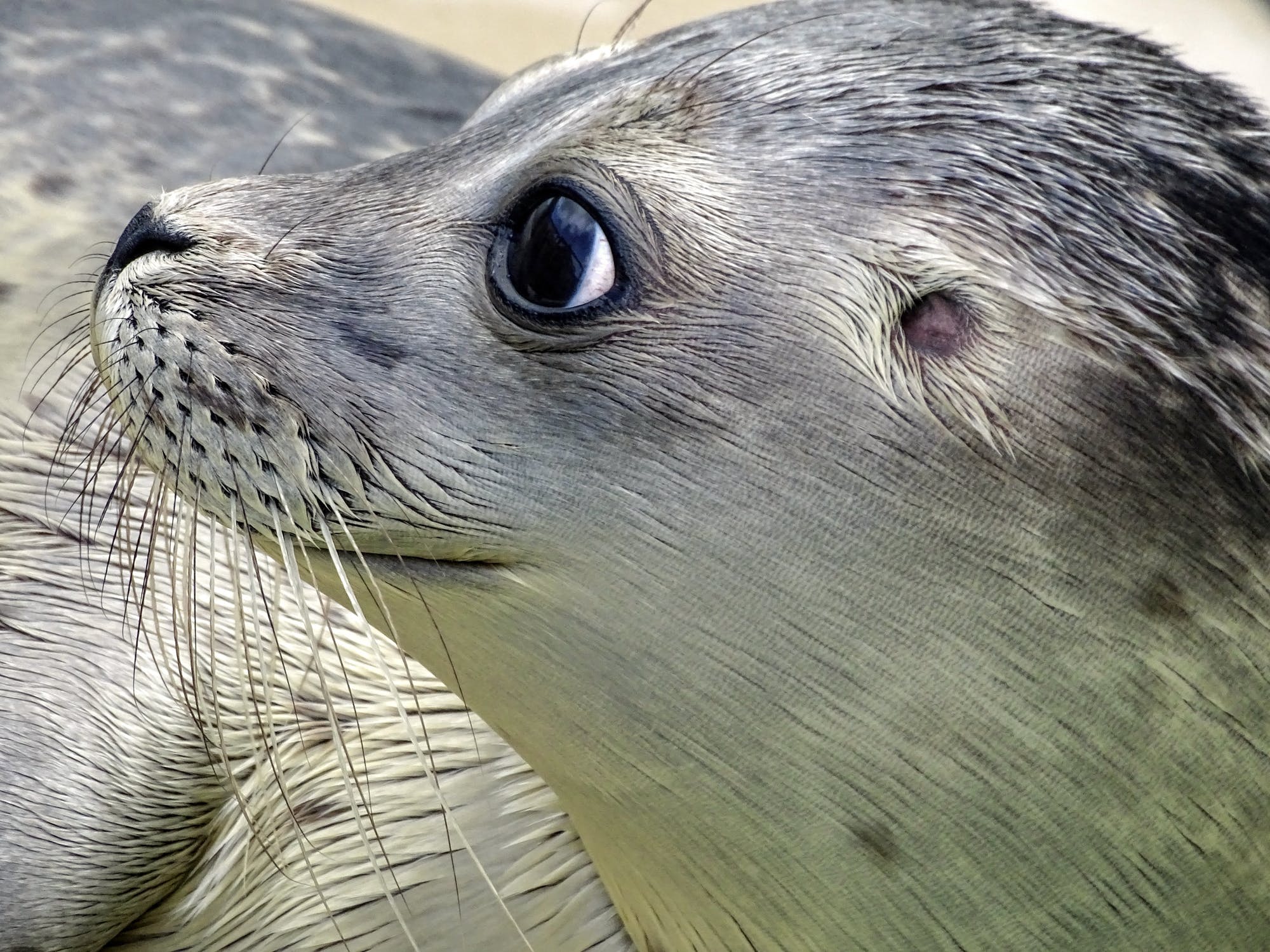 Two weeks ago, my associate, Jennifer Lutz, Director of the True Health Initiative, testified at a public session of the 2020 Dietary Guidelines Advisory Committee in Washington, DC. More on that presently.

The argument might be- presumably greatly aided and abetted by the Caviar Lobby, running on the very high profit margins of their product: caviar is nutrient rich, full of the omega-3 fat all sea lions need.  Besides, everyone loves caviar, so - eat caviar!

And so, however fishy the influence of profiteering, the memo is received and dutifully translated into policy: “let the sea lions eat caviar” becomes lore. It takes its place in the ranks of sea lion dietary gospel.

And, of course, the message reverberates out much further than that. The very groups that sought (bought?) this inclusion in the first place now react as if delighted to discover it, as if it is some happy surprise. The Royal Order of The EGGceedingly Fishy Sea Lion Feeders never hints that they did all they could to manipulate the guidelines. They simply point to the guidelines they helped shape under the influence of something that rhymes with “funny” but really isn’t- and say: see!

They, and others like them, proceed to run richly-funded ad campaigns, peddling their product as the one, true dietary panacea for sea lions, invoking the Sea Lion Dietary Guidelines to validate their claim.

And so the circle is complete. Trade groups wanting to sell fish eggs manipulated the dietary guidelines so they could be used to sell more fish eggs, make more money, and manipulate the next iteration of sea lion dietary guidance ever more effectively.

All in favor, flap your flippers.

The first problem with this imaginary scenario, of course, is simply that caviar is fish eggs. If the seals and sea lions of the world eat up all the fish eggs today, there will be no fish tomorrow. These dietary guidelines feed the gourmandize of adult sea lions, and the gluttony of the Caviar Lobby now- and consign the next cohort of sea lion pups to early death by starvation.

The second problem is the conflation of a nutrient for a food. Yes, seals and sea lions do indeed need abundant omega-3 fat in their diets to be healthy. But nearly every food choice in the seas is a source of that omega-3, and while they could get it from caviar, they have no need to do so. They could get it from any reasonable assembly of sea foods into any reasonable approximation of a sea lion diet.

Sure, sea lions can still eat some caviar. But if they line up for it because they are told it is the one, true quality source of omega-3; if they believe the more, the better, because aggressive marketing campaigns have told them just that in an endless sequence of clever, persuasive, engaging ways; if its place in their dietary guidelines convinces them that they, and their pups, need fish eggs every day- then in short order they ravage the ecosystems of the oceans. They destroy their own food supply, they eat their pups’ food, and by unbalancing their diets, damage their own health along the way.

The third problem with all of this is the now obvious doozy: this scenario is not imaginary. We are the sea lions. The caviar is a stand-in for meat. The omega-3 is a stand-in for protein. The lobbyists are standing in for… the usual suspects.

Despite knee-jerk ad hominem criticisms, and profit-motivated counter-arguments, the Eat-Lancet Commission Report on diet for the health of people and planet alike was NOT written by a tribe of ideological vegans. I know many of those involved personally- and they are certainly not all vegan. They are some of the world’s best health and sustainability scientists. They are also some of the best people I’ve ever met, devoted citizens of the world- looking out for us all, and weathering the slings and arrows of outrageous reactions as required to say and do what’s right. Their conclusion that modern countries around the world must reduce meat intake by over 90% to remain within the boundaries of sustainability related to water use, land use, and greenhouse gas emissions- is not a conclusion they were happy to reach. It just happens to be true.

How does Jennifer’s testimony to the DGAC fit into this narrative? The True Health Initiative recently commissioned a paper, now peer-reviewed and published, on the prevailing definition of “protein quality,” concluding that urgently warrants an update.

We speak of protein as the caviar-peddlers above speak of omega-3: as if it is best to get it from its one, most concentrated source. But just as almost any assembly of sea lion foods provides sea lions with all of the omega-3 they need, so too, up here on dry land, for protein. Any, even vaguely complete diet in America- including any balanced, plant-exclusive (vegan) diet- readily provides all of the protein, in quantity and quality, each of us needs every day.

So Jennifer told the committee about our paper, and related work. She reminded them that the Dietary Guidelines for Americans are about recommending those foods and dietary patterns that most decisively promote health, prevent disease, add years to lives, and add life to years. She told them as well- in the company of major medical organizations- that effects on the planet and climate and sustainable food production- ARE health effects, too. Perhaps indirect, and perhaps over a bit more time- but health effects, just the same. There are no healthy people on a ruined planet incapable of feeding them any longer.

Jennifer had many like-minded colleagues in that auditorium, making related comments. But, of course, the beef lobby was there, too- with all kinds of money to spend on…business as usual.

We are the sea lions, and yes- there is something insidiously fishy about our dietary guidelines. Unless we learn to see through the swirl of marketing campaigns invoking dietary guidelines those marketing dollars corrupted in the first place, there will soon be no fish in our sea. And our hungry pups will have us, in our gullible and perhaps gluttonous multitudes, to thank for that.

View all
Leader of the Band: 6 Key Traits for the Performance-Driven CFO
6 Things to Have in Mind When Choosing a Lawyer for Your Case
How to Use Objectives and Key Results to Drive Business Growth
How To Build a Team Full of Gratitude
5 Ways to Supercharge Your Database Management Processes
Which Legal Services Should You Use to Protect Your Business Intellectual Property?
Energy Crisis: An Unexpected Ally Saved Europe From a Great Blackout
The Negative Environmental Impact Of Robotics
Electrical Engineering & Substation Training Using Virtual Reality
Benefits and Challenges of Smart Energy Grids
Why Big Data is the Future of Sustainable Fishing?
What Are the Top Benefits of Solar Panels?
The Growing Role of Machine Learning in Fraud Detection
Buying and Selling Companies with Arrowpoint Advisory MD, Daniel Domberger
Fond Of Collecting Coins? Here Are 6 Things To Know
Everything You Need to Know about Cryptocurrency
Determining The Return On Investment For Virtual Reality Training Software
Arctic Bearz is the NFT with a Heart
Central Bank Digital Currency: The Fed Speaks
Who Benefits from Canceling Student Loans?
Some Economics for Martin Luther King Jr. Day
The US Economy as 2022 Begins
Advice for Academic Writing About Data
The Fed as Borrower of Last Resort?
Is Artificial Intelligence Fueling a Nuclear Arms Race?
Dubai Becomes World’s First 100% Paperless Government
Is Social Media the Breeding Ground For Fake News?
Why Countries Need A National Artificial Intelligence Strategy
Money versus Currency: How Governments Steal Wealth
Eric Zemmour Officially Announces His Candidacy For French Presidency
How IoT is Revolutionizing Healthcare in the Pandemic Era
Why Artificial Intelligence Struggles with Causality
Why Science Should Be Open To All?
How Machine Learning Disrupts Diabetes Care
The Metaverse: A Different Perspective
Post-Covid19 Era and The 5th Industrial Revolution
What Are The Health Benefits of Using a Large Room Humidifier in Your Home?
Batman Found His Riddler, Sherlock His Moriarity, India Its Pakistan and Kohli Lost his Captaincy
Dead Men Do Tell Tales
Will the Cosmetic Surgery Boom Continue in 2022?
The Beginner's Guide to Creating the Perfect Founding Team
Design is How it Works, Not How it Looks
How Big Data and Artificial Intelligence Can Create New Possibilities
Essential Guide to Use Google Local Service Ads
How Virtual & Augmented Reality are Revolutionizing the Mining Industry
What is the Advantage of Dedicated Versus off the Shelf Software?
VR Training Practicality in the Post-Covid Online Era
How to Enhance Soft Skills Training with Virtual Reality