Meating the Enemy, and It Is Us

Meating the Enemy, and It Is Us 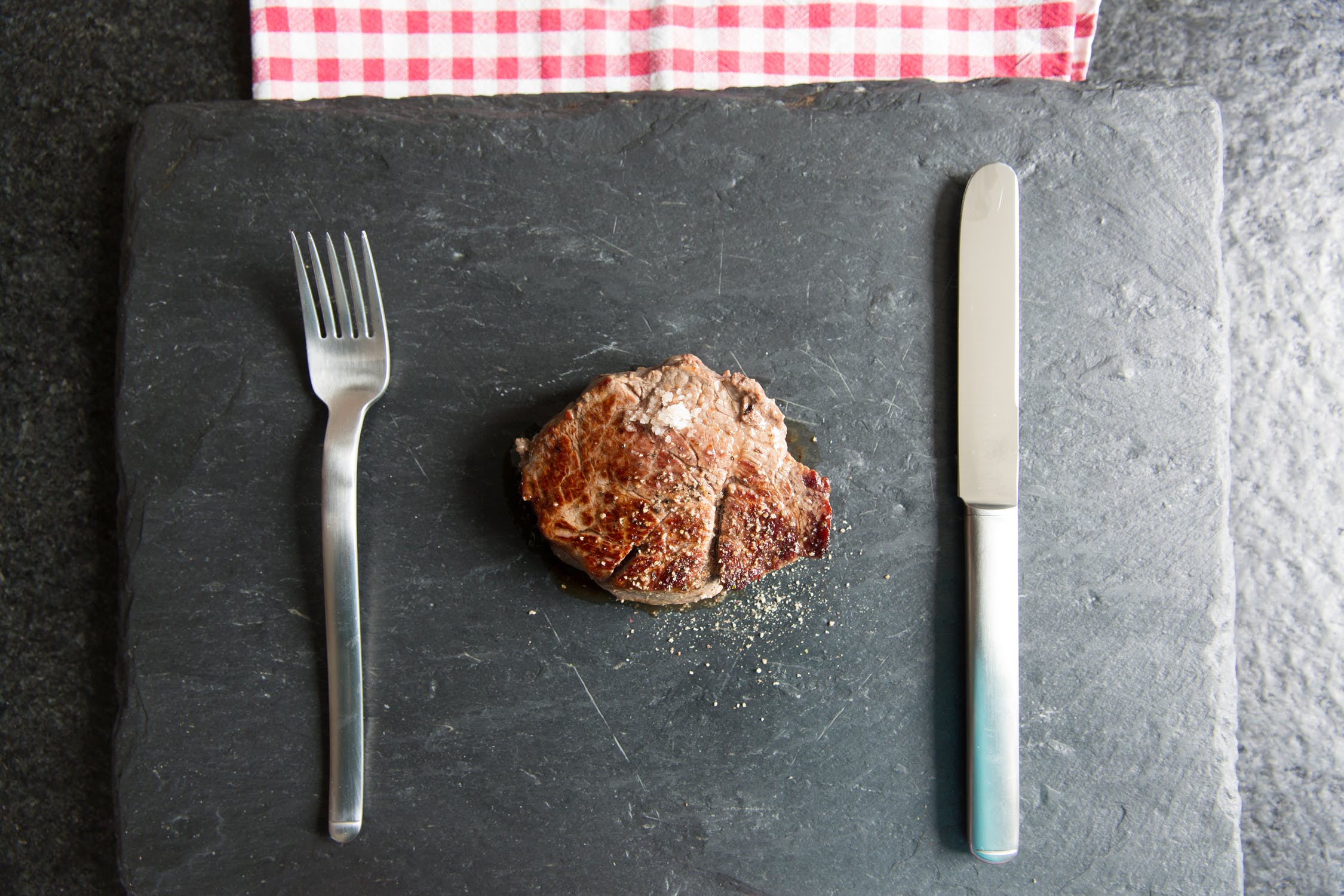 Even as action in the space of “plant-based meats” (and other meat alternatives) lurches through these early days to a far from certain equilibrium, we have already the certainty of opposing reaction to greet, and “meat” it. We learn that Arby’s, along perhaps with others, and presumably with carnivorous tongue in avaricious cheek, is offering us “meat-based plants.”

As a guy of a certain age, I confess my sympathies are more often with the irreverent than with the hieratically righteous, the so-called “PC police.” I recognize that Arby’s is making a joke- of sorts- and inviting us to laugh. I would if I could. I can’t, and neither should you.

To begin, every dog owner must understand that animals much like the ones mass manufactured, fattened, and slaughtered for our gustatory diversions harbor the same, basic emotional propensities as do we. No controlled trials are required to know that dogs experience love and loyalty, joy and sorrow, contrition, anxiety, fear, pride, and shame. We who call one of “man’s best friends” our personal friend and family member see this on display daily.

Pigs, we are told, are at least as intelligent as the family dog, and probably more so. They presumably understand and experience the incarceration, cruelty, and dread of their mass manufacture and slaughter much as would that dog you love. Pause, at least, to consider that.

Cattle and the other mammals to which this pertains less often- sheep, and perhaps goats- doubtless experience their particular variant on much the same theme.

We likely have a harder time relating to animals more distal to us than these, our mammalian cousins. But here, we do have research and the insights of close observation to tell us how much birds think and feel, how intelligent is the octopus, that fish can be lonely and depressed.

I say all this not to suggest that eating animals is precluded by the feelings and thoughts of the animals involved. Animals eating animals has always been part of the “natural order.” Rather, I say this simply because it is true, and thus- not a joke, unless you would laugh at your dog being strung upside down by her legs, electrocuted to death, and cut into steaks. I say it as well because the way we raise and consume domestic animals is not part of any “natural order.” Hunting for your family dinner yourself is another matter, and so too the family farm.

So, the first rebuttal to Arby’s joke is the most self-evident, because it is literally on display to many of us, every day: it almost certainly puts a measure of gratuitous cruelty on the menu. You can decide you don’t care about the suffering of a species other than your own, but you should not have the option of not knowing. Perhaps I may borrow from medicine: to decide, we must first be informed.

In case you are wondering, I have three dogs, and a horse. I love them, and partly because of such relationships throughout my life, stopped eating any mammals in adolescence. I prefer not eating any poultry either now, for the same reasons, but allow for carefully sourced poultry on special occasions once or twice a year.

I appreciate all life, but concede I cannot relate to fish. My vegan friends could rightly argue that shouldn’t matter, and I respect their point of view. Even so, fish have figured in my diet. I love the taste of fish and seafood, and I think eating certain fish in certain quantities is good for me. However, I know it’s bad for the fish, and the oceans, and thus- the world. So, I eat fish only very occasionally now. This is not my native preference necessarily, but a response to the current reality we all share. We didn’t ask to be here, and now- but neither did those who went off to fight World War II. We all must play the hand our little slice of history deals us.

The second rebuttal is that there was a reason bigger than any of our personal and parochial concerns for contriving “plant-based meats” in the first place: people like to eat meat, but mostly have to stop if their children are to inherit a viable planet and a sustainable food supply. The planet’s capacity to sustain us is in question, and in peril- and without question, meat consumption is a critical, modifiable influence.

Arby’s irreverent humor rather ignores this inexorable imperative. Going the “other way” in this case would be a bit like a Cruise Ship Captain with a cheeky sense of humor carrying “personal sinking devices” (a lead block for each passenger, perhaps, with a waist tie and a water activated light)- rather than personal “flotation” devices. A little funny, maybe, until the water started to rise. Our water is already rising.

Finally, while the single best diet for health might be debated, there is no debate that relative to prevailing norms in the U.S. and much of the world, more whole plants, fewer animal parts and products would be much, much better. The evidence here is diverse, vast, and consistent.

Speaking of debate, I recently participated in one on a related topic.  Although my counterpart was there expressly to dismiss the evidence that plant-based diets are better for health, she had no answer at all when the moderator innocently asked for any research evidence showing that animal-food-predominant diets were preferable. That’s because there is none, and that’s because they are not. Perhaps a true “Paleo diet” could compete for such laurels, but the same experts who tell us how much wild meat our Stone Age ancestors ate, tell us they took in about 100 grams of fiber daily from a wide variety of wild plants. Good luck with that, and consider purchasing your toilet paper in bulk.

Nobody laughs when the family dog is hit by a car. Nobody laughs when a loved one suffers a MI, a stroke, or succumbs to diabetes, dementia, or cancer. Nobody laughs when the island they called home sinks away beneath them. Nobody laughs when their home is washed away, torn apart, burned down. Nobody laughs looking into the imploring eyes of a hungry or thirsty child whose need will go unmet. Grandparents, surely, find little humor in the idea that the ample diets they enjoyed will outlive them by little, and run out long before their grandchildren’s needs.  I trust no one finds it too amusing that lions, and tigers, and bears may be left with no part of this planet to call their own- and in our lifetime, could join the ranks of innumerable species we are marshaling into oblivion.  Oh, my- indeed.

Plant-based meat, and other meat alternatives, whatever the relative merits of each contestant, are responses at the confluence of consumer demand, and a clear and omnipresent danger. Meat-based plants are a joke.

The consequences of callous indifference, however, are non-denominational. The plight of the planet will scorch vegan and carnivore, the jocular and solemn alike, along with everyone in between.

The problem with Arby’s joke, in other words, is that the last laugh…will be on us all.